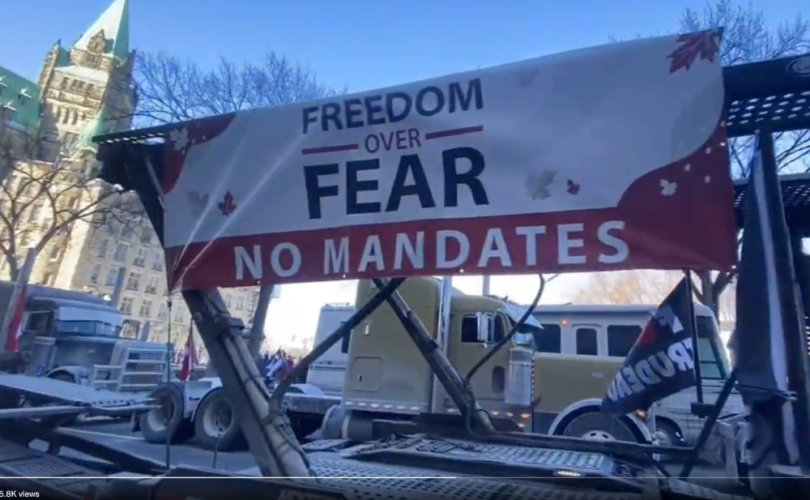 (LifeSiteNews) – Thousands of long-haul trucks and tens of thousands of people have descended on Ottawa today, in an attempt to pressure the federal government to back down from its draconian COVID policies.

The scene in Ottawa. I get the impression people here don’t like Trudeau. 😉#freedomconvoy22 pic.twitter.com/1Re5RYkMRD

The “Convoy,” as it is now colloquially called, has sparked international interest, with people all over the world inspired by what they see happening in a nation that has been under the thumb of some of the darkest COVID oppression in the world.

Australian truck drivers and citizens have been so inspired, that news has come out of the Land Down Under that Aussie “truckies” are set to follow the lead of the Commonwealth brethren in a pursuit of freedom.

A convoy led by Aussie truck drivers is set to swarm Canberra to protest against vaccine mandates. The development follows the lead of Canadian truckers who are making their way to Ottawa in huge numbers.

Even Canadian Conservative Members of Parliament, who had for the past couple of years been mostly silent about the heavy-handed maneuvering of Trudeau and his cronies, are speaking out in droves, along with the national conservative press which has finally found courage, it seems.

LifeSiteNews has been on the ground at many points along the Convoy, so that we can publicize the truth about what is happening: a true grassroots protest movement of Canadian patriots who love God and love their country.

The leftist mainstream media has taken to smearing the Convoy participants and supporters as racist and fascist, even though it is a diverse group who are neither anti, nor pro vaccine –  but simply anti-mandate and pro freedom.

In the wake of all the pressure, it looks like Justin Trudeau has gone into hiding, first citing exposure to COVID – even though he is boosted and tested negative – and now he has left the city and is in cottage country due to unspecified “security concerns.”

Will the Convoy accomplish its goals?

As far as popular movements go, the Convoy phenomenon is a smashing success, and nothing like this has been ever been before in Canada.

But what can the movement actually accomplish? Can Canadians expect any real, positive changes to come about as a result of the truckers’ efforts?

There are a number of possible scenarios that could play out, and it is important to understand how Canadian law works, at least at a layman level, and what sort of political or legal changes could be on the horizon.

Scenario 1: Everything is dropped

The Convoy has released a list of demands to the federal government, saying that they want the termination of “all vaccine passports, including inter-Canada passport systems,” along with eliminating all “mandatory programs of vaccination and contact tracing.”

Canadian law operates both federally and provincially. The federal government could easily strike down any federal mandate, such as those for civil servants in federally regulated industries, and mandates that apply to citizens who use federally regulated services, like air travel and railways.

However, the vaccine passport systems that are in place in Canadian provinces are not a part of federal jurisdiction, thus the provincial premiers and their legislatures would have to strike those down.

But if the feds were to back down from federal mandates, it would send a message and I would not be surprised if provinces swiftly followed.

The rhetoric coming out of public health departments in the provinces is already shifting to be more in line with reality and freedom. It seems they see the tide shifting and they know that Canadians have had enough.

Since medical officers for BC, Ontario & Toronto have all just said it’s time to learn to live with the virus & clearly want to roll back rules, the convoy is arguably more in line with public health views than Trudeau is, who won’t say this & has only been layering on more rules

The feds dropping their mandates would be the best case, but it is also unlikely that it will come that easy, as in true Marxist fashion they are doubling down in their rhetoric. It will probably be more complicated and uglier than a simple striking down, although I pray that happens.

Scenario 2: Provinces strike down their laws and ignore the feds

Before COVID became the singular focus of every politician, provincial leaders had no problem blaming Justin Trudeau for their problems, especially the conservative leaders. Currently about half of Canada’s provinces are run by conservatives, who seem to have forgotten that they weren’t liberals in early 2020, and since then have became carbon copies of their liberal counterparts.

However, elections are on the horizon in some provinces, and the federal Conservative Party of Canada looks like they want a change in leadership and to get on board with the populist uprising.

This means that the political opportunists know that the time has come to stick it to the feds and that people are ready to be “over COVID.”

If a provincial premier were to come out and strike down their remaining COVID policies, he would be seen as a hero by much of the citizenry. The economy would begin to soar, and it would put even more pressure on the federal Liberal Party.

The federal government currently only has a minority government, which means there are ways for an election to be called if the opposition wants it to happen.

Even though the provincial and federal parties are technically separate, there is an implicit connection between them in the mind of most people. So, if for example Jason Kenney in Alberta completely opened up the province, the federal Conservatives would benefit greatly, and would be motivated to fight harder in Ottawa. The same could be true in other provinces.

In addition, it would be very difficult for the feds to keep up the ruse if the provinces had moved on.

But, it might be even more complicated than that.

Scenario 3: The fight is just beginning

My personal opinion is that the fight is just beginning, and that it is unlikely that the Liberals will back down. They have proven they are Marxists to the core and ideologically possessed by their ideals that will destroy the country.

They don’t care about your money, your health, your children, or you at all. They only care about the narrative and power. They do not possess any humility, thus coming out with a mea culpa is hard to see, and I think they are more likely to go down in proverbial flames than to ever admit they were wrong.

However, I do not see this as a negative.

Canadians have forgotten how to fight, and in truth, we have never really had to fight this hard for our rights.

Parliament has been effectively closed for the past couple of years, and the intense back and forth between the warring parties has ceased. It is not a perfect system, but if the parliamentarians simply do their jobs and listen to the constituents, things function a lot better, and Canadians have more motivation to be active in civic life.

In the past, things often got a little heated in the House of Commons, and right-wingers were willing to fight – sometimes literally – because of what they believed to be the right thing for Canadians.

Now, no one is advocating for any violence, but the true fighting spirit needs to return if we are to live in a free country.

Whatever happens over the next few weeks in Ottawa, Canadians need to look at this as a moment to wake up and fight, even if this is just the beginning and, like the truckers, we are in it for the long-haul.