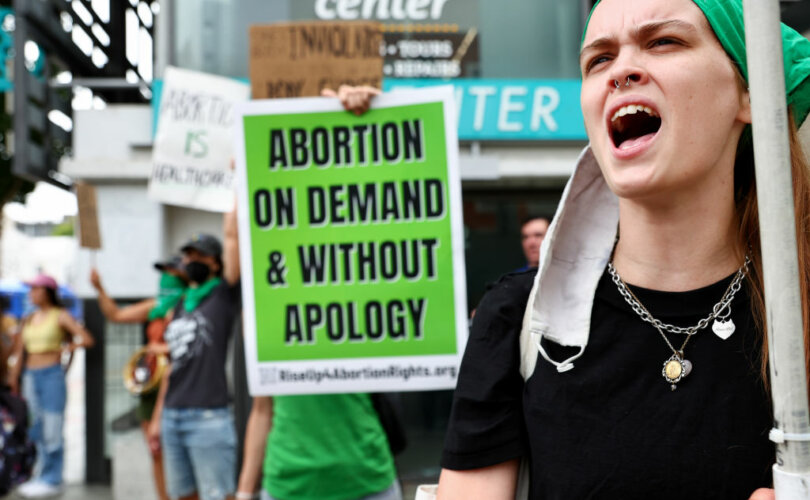 Pro-abortion activists chant while marching from City Hall to a Planned Parenthood clinic on July 16, 2022, in Santa Monica, California(Photo by Mario Tama/Getty Images

(LifeSiteNews) — Americans voted Tuesday on abortion-related ballot initiatives in California, Kentucky, Michigan, Montana, and Vermont, and as of 5:30AM CST Wednesday morning, and abortion allies prevailed in all five states.

A proposed amendment to the Vermont Constitution expressly guaranteeing “an individual’s right to personal reproductive autonomy,” including abortion, was the first to be decided, with 76.7% voting in favor, making Vermont the first state to formally enshrine abortion “rights” in its constitution.

As of the time of this writing, a California initiative to add a “fundamental right to choose to have an abortion” to its state constitution had 65.1% of the vote in its favor with 41 percent of the votes counted. The amendment’s success was a foregone conclusion given California’s status as the most liberal state in the Union.

Michigan’s so-called Right to Reproductive Freedom Initiative seeks to establish a state constitutional “right to make and effectuate decisions about all matters relating to pregnancy, including but not limited to prenatal care, childbirth, postpartum care, contraception, sterilization, abortion care, miscarriage management, and infertility care.” 56.6% of Michiganders voted to approve it.

While the above results are disappointing to pro-lifers, two all come from more left-wing states while the third in Michigan comes in a battleground state that saw Democrats win statewide by significant margins. Heavy Democratic turnout likely helped propel the abortion measure in Michigan. The remaining two referendums, however, may be cause for greater concern.

Kentucky’s proposed amendment clarifying that its constitution does not “secure or protect a right to abortion, or require the funding of abortion,” meant to stop abortion allies from blocking pro-life laws in court, lost with 52.4% voting against it.

Lastly, Montana posed to voters not a constitutional amendment but a proposed state law to recognize the personhood of preborn babies who survive abortions and guarantee they be cared for. 52.6% of voters opposed it.

These percentages are potentially subject to change once the remainder of the states’ votes are counted. But if they hold, they suggest a serious challenge for pro-life reformers moving forward.

By restoring states’ ability to fully decide abortion policy, the U.S. Supreme Court’s overturn of Roe v. Wade in June unleashed a new status quo and rampant speculation about how voters will react to it. Tuesday’s defeats follow a proposed amendment to clarify that the Kansas Constitution does not protect abortion failing at the ballot in August. At the time, pro-lifers attributed the loss in large part to pervasive misinformation about pro-life laws’ impact of women facing medical emergencies.

Properly gauging public opinion on abortion has long been hobbled by inconsistently or inaccurately-framed poll questions, popular misconceptions about what abortion laws and rulings would or would not actually do, and discrepancies between what voters think of the issue and how they prioritize it. Opinion may be further affected by newly-enforced state laws taking effect over a long enough period of time for voters to see for themselves their actual impact.

Moving forward, pro-lifers will have a number of questions to consider: whether they and their candidates have been effective in countering pro-abortion misinformation about pro-life laws, whether ballot referendums are the most effective mechanism for pro-life reforms, how to most effectively frame the pro-life message, and more.