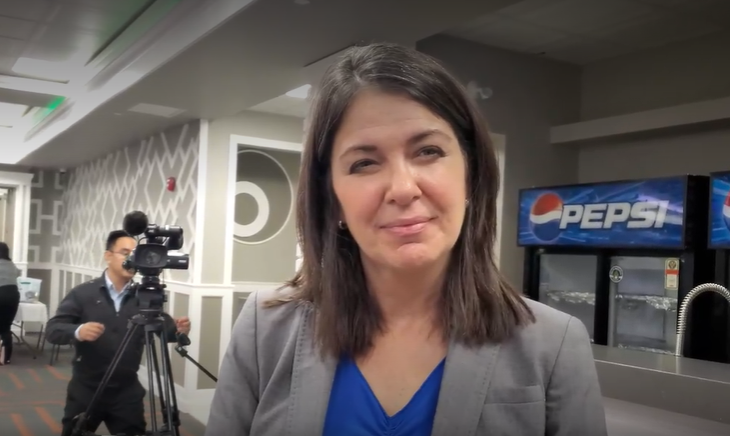 MEDICINE HAT, Alberta (LifeSiteNews) – Alberta leadership front-runner Danielle Smith told LifeSiteNews she would not be willing to re-examine the province’s “bubble zone” law that bans pro-life protesters from gathering near abortion clinics, as well as saying it is “polite” to use biologically incorrect pronouns when asked to do so.

In a brief interview at a campaign rally in Medicine Hat, Alberta last week, Smith – who is running for United Conservative Party (UCP) leadership on October 6 – told LifeSiteNews that she “wouldn’t” be willing to reconsider Alberta’s so-called “bubble zone” abortion law if she wins the party leadership race and becomes premier.

Alberta’s “bubble zone” law, passed in 2018 under then-Premier Rachel Notley of the far-left, pro-abortion New Democratic Party (NDP), made it illegal for pro-lifers and counselors to come within 50 meters of an abortion facility for any activism-related purposes.

Under the harsh law, first-time violators face a $5,000 dollar fine and up to six months in prison.

It should be noted that United Conservative Party of Alberta (UCP) MLAs refrained from voting either for or against the bubble zone law at the time, and Smith herself was not an MLA at the time the controversial law was passed.

In the LifeSiteNews interview, Smith was also asked about Bill C-16, which was passed by Prime Minister Justin Trudeau’s federal government in 2017 and formally enshrined “gender expression” and “gender identity” as protected classes under the country’s Human Rights Code and Criminal Code.

Smith told LifeSiteNews that she “personally” thinks it is “polite” to use biologically incorrect pronouns if asked to do so, saying “people ought to be polite to their neighbors.”

However, Smith did mention that “there is a weird woke culture” that tries to chase people out of the public sphere by “dogpiling” and cancelling those who refuse to modify their language at the request of the gender-confused.

“We have to able to be able to have conversations where we can get to an understanding, so, I think people have taken it too far,” remarked Smith.

Under the NDP, Alberta also passed a law that made it illegal for teachers to inform parents of their children’s involvement with so-called Gay-straight alliance (GSA) clubs.

Smith said to LifeSiteNews that she “supported” GSAs at the time, saying she understood them to be “safe places” where “kids could come out to their peers.”

Despite this support, Smith said that in her mind the clubs were “never supposed to be” about “teaching kids concepts that are not appropriate for their age,” which is something she says she does not support.

The UCP is set to elect its new leader on October 6, after Premier Jason Kenney announced earlier this year that he would step down due to poor ratings following his imposition of vaccine mandates and lengthy lockdowns during the COVID-19 so-called pandemic.

Polls show that Smith is the clear frontrunner to replace Jason Kenney as premier of Alberta.

While Kenney has a relatively good pro-life voting record, both as an MP and later as an MLA, his rapid slide to the left during the COVID era resulted in him becoming equally unpopular with a large portion of his voter base.

As for Smith, while she says adoption should be promoted over abortion, she describes herself as a “libertarian” and has repeatedly thrown her support behind both abortion and same-sex “marriage.”

The only candidate in the running with the full endorsement of Campaign Life Coalition, Todd Loewen, has 7 percent support in a recent poll.

Campaign Life Coalition (CLC) has urged pro-life Albertans to consider voting for Loewen given his strong pro-life and pro-family platform.

“Of the seven UCP leadership contenders vying to replace Jason Kenney, one is a solid pro-lifer that we can wholeheartedly endorse,” wrote CLC. “Todd Loewen is a former UCP MLA who now sits as an Independent and is seeking to become leader. He was kicked out of caucus by Jason Kenney after criticizing the latter’s destructive lockdowns, and subsequently calling for the Premier’s resignation.”

Loewen said in a statement sent to CLC that he would “support policies that make it easier for charities to assist women in crisis and take action to reduce barriers for adoption.”

He has also said that he has a “personal conviction for the pro-life message,” and “believes in policies that support families and the raising of children.”

“[I’ve been] very clear and consistent that parents are the primary educators of their children. Public schools should be teaching core academic subjects while leaving families to guide their children in matters of ideology and values,” added the candidate.