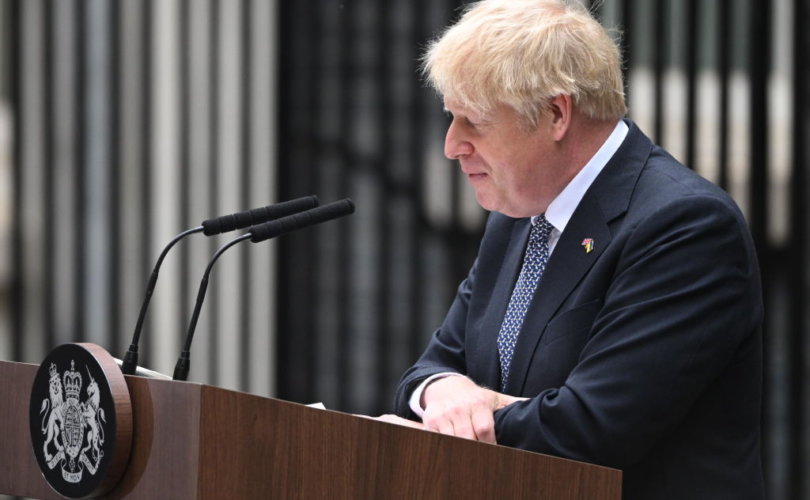 Prime Minister Boris Johnson addresses the nation as he announces his resignation outside 10 Downing Street on July 7, 2022, in London, EnglandPhoto by Leon Neal/Getty Images

LONDON (LifeSiteNews) – British Prime Minister Boris Johnson announced his resignation as leader of the Conservative Party today following a cascade of scandals relating to breaking his own lockdown-era rules and lying to the public about his knowledge of sexual misconduct allegations against former deputy chief whip Chris Pincher.

Johnson was welcomed with cheers as he delivered a statement outside of No. 10 Downing Street early this morning, announcing his decision to step down as leader of the ruling Tory Party while vowing to stay on as prime minister until a replacement has been chosen, which could be as late as October.

After months of scandals concerning his defiance of the lockdown rules he imposed on the nation, subsequently receiving fines for breaking his own rules, Johnson said “it is clearly now the will of the Conservative Party that there should be a new leader of that party and therefore a new prime minister.”

The past week has seen a slew of top-level cabinet ministers walk out, apparently owing to Johnson’s handling of allegations against former deputy chief whip Chris Pincher, who was accused of sexually harassing two men in June.

Johnson said that “the process of choosing that new leader should begin now and the timetable will be announced next week,” with a spokesman confirming that the party will have elected a new leader, and therefore prime minister, by October.

“I want to say to the millions of people who voted for us in 2019, many of them voting Conservative for the first time: thank you for that incredible mandate, the biggest Conservative majority since 1987, the biggest share of the vote since 1979,” Johnson stated as he addressed the nation.

The reason, he said, that he “fought so hard to deliver that mandate in person,” refusing to resign until today, “was not just because I wanted to do so, but because I felt it was my job, my duty, my obligation to you to continue to do what we promised to do in 2019.”

“I am immensely proud of the achievements of this government,” he continued, “from getting Brexit done, settling our relations with the continent for over half a century, reclaiming the power for this country to make its own laws in Parliament.”

Johnson celebrated “getting us all through the pandemic” while “delivering the fastest vaccine rollout in Europe, the fastest exit from lockdown and, in the last few months, leading the West in standing up to Putin’s aggression in Ukraine.”

Changing tone, the former leader admitted to unsuccessfully attempting to “persuade” his colleagues from ousting him while having taken a “relentless sledging” over the past few months in the press regarding his conduct in office.

“I regret not to have been successful in those arguments. Of course it’s painful not to be able to see through so many ideas and projects myself,” he said, adding that “at Westminster the herd instinct is powerful. When the herd moves, it moves.”

Addressing the British public, Johnson noted that while many “will be relieved” to see the end of his tenure, he is nevertheless “sad … to be giving up the best job in the world.

Among the ministers tendering their resignations and pressuring Johnson to leave office were Health Secretary Sajid Javid and Chancellor of the Exchequer Rishi Sunak.

Prime Minister: this is not sustainable and it will only get worse: for you, for the Conservative Party and most importantly of all the country. You must do the right thing and go now. pic.twitter.com/F2iKT1PhvC

“Prime Minister: this is not sustainable and it will only get worse: for you, for the Conservative Party and most importantly of all the country. You must do the right thing and go now,” he wrote earlier today.

Opposition leader Sir Kier Starmer has joined calls for Johnson to leave Downing Street immediately, rather than to wait for a replacement, stating that Johnson must “go completely” and not “cling on” to power any longer.