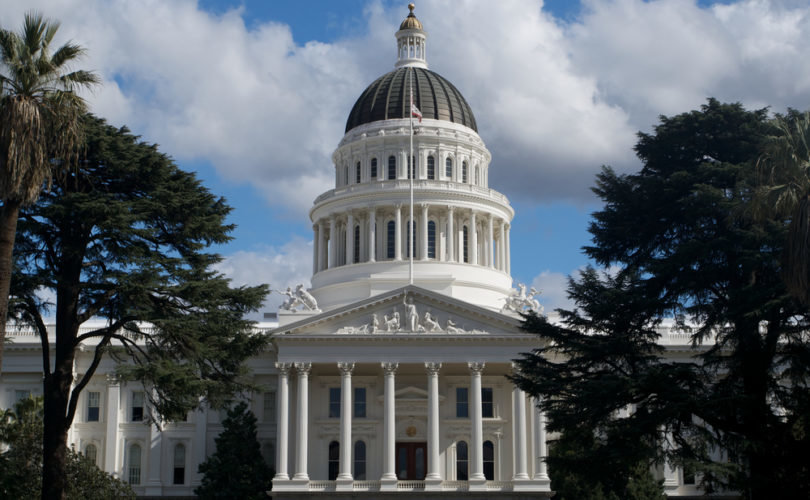 SACRAMENTO, California, September 10, 2015 (LifeSiteNews) — The California Assembly has passed an assisted suicide bill that could soon pass the Senate and be signed into law by Gov. Jerry Brown.

But an opponent of the legislation says the bill's backers “didn't focus on the bill's language.”

Known as ABX2-15, or “The End of Life Option Act,” the legislation is modeled after laws in Oregon and Washington State. A similar bill passed the state's Senate this summer,  alarming the Catholic Church and others who say the bill is immoral and unjust.

The Los Angeles Times reports that Governor Jerry Brown may sign the bill, though he has expressed reservations based upon the legislative process through which the bill has traveled.

Margaret Dore, president of Choice is an Illusion, said in a statement that “the bill’s language is stacked against the patient and applies to people with years, even decades, to live.”

“The bill applies to people with a ‘terminal disease,’ which is defined as having less than six months to live,” said Dore. “Most people think this means ‘dying.' However, in Oregon, which uses a nearly-identical definition of terminal disease, an 18-year-old with insulin-dependent diabetes is ‘eligible’ for assisted suicide. [Additionally], doctors are often wrong at predicting life expectancy.”

The Times cited three Assembly Members with experience with end-of-life care, two of whom backed the Act. The bill's author, Susan Eggman, is a former hospice worker who says that she hoped her colleagues “would do the right thing and move us closer to making it possible for terminally ill Californians to decide for themselves how to manage their last days.”

However, Assemblywoman Cheryl Brown said she was concerned about doctors making incorrect diagnoses. She described how she was urged to let her ill son die, but after she refused, he healed from an infection and within 19 days of her refusal was off life support.

He is now a husband and father.

Dore, who has worked in guardianships, wills, and probates as part of her law practice, says she “saw abuse of all kinds” in her work. She says California's bill fails to protect parents from children who may want them to die. It “sets up the perfect crime: your heir can actively participate in signing you up for the lethal dose and once the lethal dose is in the home, there’s no oversight –not even a witness is required. If you resisted or struggled, who would know?”