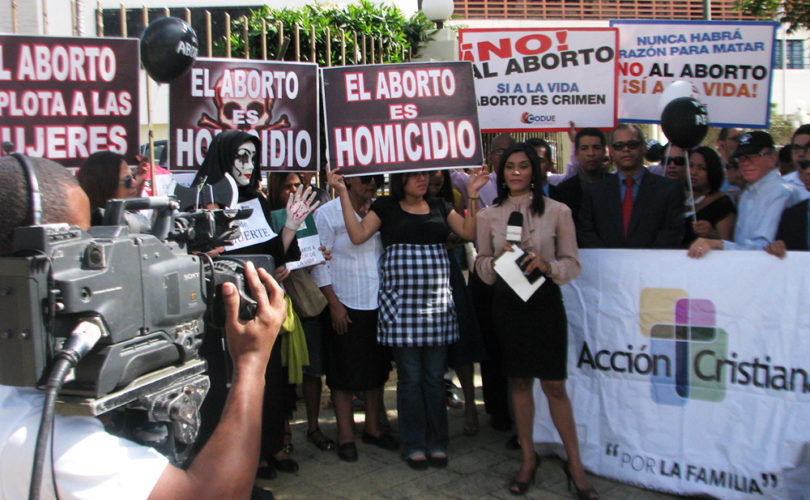 Protesters at last Monday's rally in front of the Dominican Republic Congress. The rally received much media coverage

Hundreds of Catholics and Protestants rallied in front of the Dominican Republic’s Congress on Tuesday carrying signs reading, “Babies don’t know about laws,” “Yes to life, no to abortion,” “Lawmakers defend life,” and “Ratify the Penal Code.” Several priests and Bishop Victor Masalles spoke to the crowd, as did Protestant leaders. (See slide show)

Meanwhile dozens of feminists and doctors chanted and rallied in opposition. Their signs said, “For women's health,” “For the rights of women,” and “For women's lives.”

The abortion issue is heating to the boiling point in the Dominican Republic, the democracy of more than 10 million people sharing the Caribbean island of Hispanolia with Haiti.

President Danilo Medina has just vetoed a revised penal code, which took several years to work its way through both houses of Congress, because it toughens punishment for abortion and provides no exceptions for pregnancies that put women’s lives at risk or that were caused by rape or incest.

Catholics and Evangelical Protestants are demonstrating unprecedented unity by rallying in the hundreds this week outside Congress and lobbying legislators one-on-one on the inside.

They are urging members of the National Assembly to resist Medina’s effort to get them to endorse his formally recommended changes to their bill, which are called “observations” in the country’s constitution.

But article 103 of the constitution states,  “All law observed by the Executive Power to the National Congress has a deadline of two ordinary legislative sessions in order to decide the issue, and if not the observation will be considered accepted.” That should mean that well before the next election in 2016, Medina’s “observations” would become part of the new law if nothing were done.

Eugenio Castillo, head of Dominicans for Life, says the churches are displaying enough muscle they might be able to get lawmakers to override Medina’s recommendations. “Protestant leaders at their pro-life rally on Monday specifically warned the legislators to watch out in the next election,” he told LifeSiteNews.

“Protestant leaders came to the Catholic pro-life rally on Tuesday. That has never happened,” he added. “And the Protestants sound like Catholics straight from Rome on this issue [saying] ‘Life begins at conception.’”

And the Catholic bishops and cardinal sound like they are going to withdraw support for Medina, which Castillo says “put him over the top” in the 2012 presidential election. Catholics make up 95 percent of the population on paper, but, according to the U.S.-based Pew Forum on Religion and Public Life, while true back in the 1970s, it is no longer. Now Pew counts only 57 percent of Dominicans as Catholic, and these are woefully underserved by a clergy-to-laity ratio of 1:10,000. Meanwhile many have left the faith, while Evangelical, and especially Pentecostal, Christians have made uncounted inroads. Castillo says there are 5,000 Protestant churches.

The Pew Forum says across Latin America Evangelical churches are luring away Catholics in great numbers, with a greater emphasis on spirituality and morality. In fact, Protestants are markedly more likely to condemn abortion, same-sex “marriage” and alcoholism than are Catholics.

Medina has considerable support from the medical profession and women’s groups inside the Dominican Republic, and from women’s and human rights groups, such as Amnesty International, outside the country.

Opposing Medina’s changes to the penal code revisions along with the Christian churches are two of the three main parties, the rightist Christian Social Reformers (PRSC) and Dominican Liberation Party. PRSC Deputy Ramon Rogelio Genao said, “We are going to reject them. We feel that these observations were poorly made with regard to the fact that they did not comply with the Constitution in their writing.” In 2010 an intense lobby by the Catholic Church caused a pro-life amendment to be added to the constitution recognizing life begins at conception.

According to Dominican Today, the Chief Justice of the Supreme Court of Justice, Mariano German, has also rejected Medina’s “observations,” saying, “My own position is that the code should be enacted as approved.”

Now Catholics and Evangelicals are aggressively lobbying lawmakers, who met all afternoon Thursday to resolve the issue, failed, and now must reconsider the subject on Tuesday. This will give Medina more time to wave the potent carrot and stick provided him by the constitution (he controls many appointments to public office) but the churches will use the same time well.

See many related articles at bottom of this page.