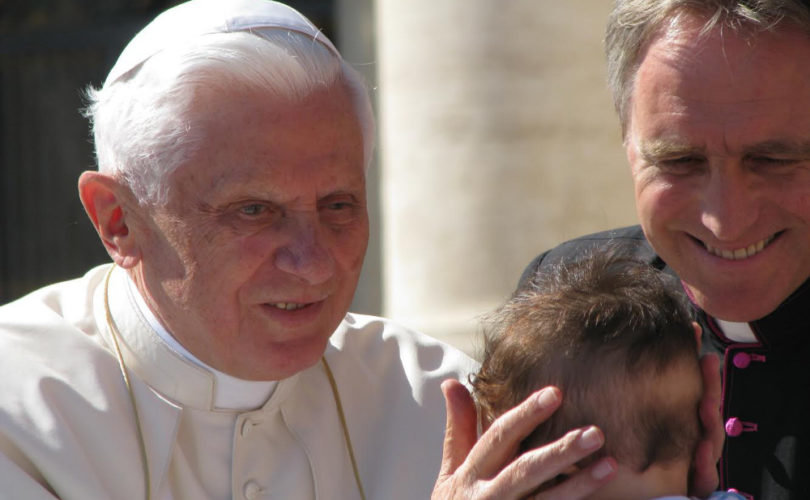 BERLIN, March 29, 2018 (LifeSiteNews) – The official website of the German Catholic Bishops’ Conference published an article highly critical of the Pope Emeritus last week, entitled “The Return of the Panzer Cardinal.”

Responding to the disclosure of a private letter Pope Benedict, 90, wrote to the then-Vatican Communications chief Monsignor Dario Viganò, Joachim Frank attacked Benedict for his less-than-fulsome opinion of a theological opponent.

In his confidential letter, Benedict had voiced surprise that Peter Hünermann, a theologian who had attacked both his papal magisterium and that of Saint John Paul II, had been chosen as a contributor to a eleven-volume series about Pope Francis’s theology. Viganò had asked the Pope Emeritus to read and review the works.

Frank, the chairman of the Association of German Catholic Publicists, took the opportunity   to criticize the Pope Emeritus’ career as the Prefect of the Sacred Congregation for the Doctrine of the Faith (1980-2005) and as the Holy Father (2005 – 2013).

In an article appearing on March 31 on the German Bishops’ katholisch.de, Frank wrote, “One cannot help wondering quite how many inner-church conflicts over the course of the past 30 years could have been avoided if this ‘great theologian’ in his cardinal’s and papal robes had refrained from such petty dissensions and narrow-mindedness.”

Frank regretted that Benedict had not remembered Peter Hünermann as the “co-editor of the large five-volume commentary on the Second Vatican Council” but as a papal critic and the “co-initiator” of the “Cologne Declaration.” Frank wrote that the Declaration had also involved over 200 other professors of theology who “revolted against the authoritarian style of leadership of John Paul II”, against a centralization of episcopal power in Rome, and “thus also targeted their former colleague Ratzinger.”

Frank accused Benedict of being resentful.

Dr Joseph Shaw of Oxford University, spokesman for those who signed the Filial Correction of Pope Francis, believes that it is unjust to paint the Pope Emeritus as resentful, and pointed out that Hünermann had actually edited one of Benedict’s own works. In fact, it is Benedict’s lack of resentment that is one of his most well-known characteristics.

“Pope Benedict is famous for maintaining friendships with theologians with whom he has major disagreements, and even entrusting them with important tasks,” Shaw told LifeSiteNews.

“He even attempted an intellectual rapprochement with Hans Kung, whom he invited to see him,” Shaw recalled.  “Some have even seem a degree of naivety in his attitude, and Benedict has arguably been let down by some of those he befriended and encouraged.”

Shaw bridled at the return of the shopworn “panzer cardinal” tag.

“The ‘panzer Cardinal’ trope is a on absurd self-serving myth, created by people who disagree with Benedict’s positions and don’t have the capacity to form convincing arguments against them,” he said.

The professor also objected to the idea that the Pope Emeritus should not be permitted to speak his mind in his private correspondence.

“Surely Pope Benedict, in his retirement, is entitled to express his views about the suitability of a particular theologian for a task, in a letter quite obviously not intended for publication. The private views of more liberal theologians on giving jobs to their opponents are far less broad-minded than Pope Benedict’s,” Shaw said.

Grant Kaplan, author of a 2015 interview with Peter Hünnerman, argued in Commonweal that the elderly theologian, who met Jorge Bergoglio in 1968, had exercised a strong influence over Pope Francis’ theology of marriage and thus upon the apostolic exhortation Amoris Laetitia.

Cardinal to German bishops: Push for change while we have Francis as pope