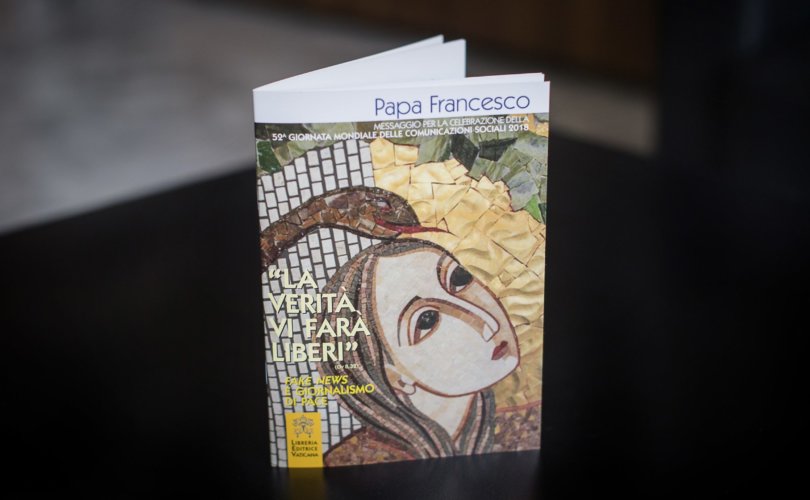 ROME, January 24, 2018 (LifeSiteNews) — One week after U.S. President Donald Trump announced the winners of the 2017 Fake News Awards, Pope Francis today invited those working in the media to promote a “journalism of peace” that acknowledges “the existence of serious problems,” but is “opposed to falsehood” and “sensational headlines.”

“Where there is confusion, let us inspire harmony; where there is ambiguity, let us bring clarity,” Pope Francis said in his Message for the 52nd World Day of Social Communications on the theme: “The truth will set you free (8:32).” Fake News and journalism for peace.

Pope Francis has said that he gets his news only from the liberal Italian daily, La Repubblica, and hasn’t watched television since 1990. He has also given priority in being interviewed to La Repubblica and to the left-leaning Jesuit magazine Civiltà Cattolica.

In his message, the Holy Father warned that spreading disinformation can have “dire consequences,” is rooted in a “thirst for power,” and uses “snake-tactics” like the Father of lies who “created the first fake news (cf. Gen.  3:1-15).”

Expressing his wish to contribute to “stemming the spread of fake news and to rediscovering the dignity of journalism and the personal responsibility of journalists to communicate the truth,” the Pope began his message by examining what is “fake” about fake news.

What is “fake” about fake news?

The term “fake news” gained global prominence during the 2016 U.S. Presidential election, as fraudulent stories went viral on Facebook and in the blogosphere. Capitalizing on the term, Candidate and then President Donald Trump subsequently directed the label to major US news agencies such as CNN and the New York Times, for what he sees as unrelenting bias and unfair news coverage of him and the Trump administration. President Trump’s clash with the “mainstream media” culminated in last week’s “2017 First Annual Fake News Awards.”

In his explanation of the term, Pope Francis said that fake news is based on “non-existent or distorted” data” which, mimicking real news, is meant to manipulate or deceive the reader in order to advance “political decisions” and serve “economic interests.”

Fake news is also “captious,” he said, inasmuch as it appeals to “stereotypes and common social prejudices,” and exploits emotions like “anxiety, contempt, anger and frustration.”

Because many people interact in “homogeneous digital environments impervious to different perspectives and opinions” (what are often called online echo-chambers), it is often difficult to unmask and eliminate fake news, the Holy Father explained. Disinformation “thrives on the absence of healthy confrontation” with differing sources, he said.

“The tragedy of disinformation is that it discredits others, presenting them as enemies, to the point of demonizing them and fomenting conflict,” the Pope said adding that fake news is a sign of “intolerant and hypersensitive attitudes, and leads only to the spread of arrogance and hatred.”

How to recognize fake news

The Pope praised educational programs, legal initiatives, and technological advancements aimed curbing the phenomenon, but he said ultimately we need to take a deeper look at its root causes, by unmasking the ‘snake-tactics’ used to manipulate and deceive the public.

Turning to the Book of Genesis (Genesis 3:15), he noted that this same strategy was used by the serpent and “Father of Lies” in the Garden of Eden. The devil, he said, “created the first fake news” and used “alluring arguments” to deceive and seduce Adam and Eve.

Pope Francis said the biblical account of The Fall of our first parents serves as a warning that “there is no such thing as harmless disinformation” and that “trusting in falsehood can have dire consequences.”

Reminiscent of St. Philip Neri’s comparison of gossip to a feather pillow torn open and strewn to the four corners by the wind, the Holy Father said that “even a seemingly slight distortion of the truth can have dangerous effects.” Once fake news goes viral, he said, it is hard to stop, in part because it appeals to fallen man’s “insatiable greed.”

“The economic and manipulative aims that feed disinformation are rooted in a thirst for power, a desire to possess and enjoy, which ultimately makes us victims of something much more tragic: the deceptive power of evil that moves from one lie to another in order to rob us of our interior freedom,” he explained, adding that this is why educating people in truth is so important.

Constant exposure to deceptive language can contaminate and darken man’s interior life, the pope noted, and “the most radical antidote to the virus of falsehood is purification by the truth.” True freedom, he said, is achieved by experiencing “the loyalty and trustworthiness of the One who loves us.” Knowing Jesus, who said “I am the Truth,” is what truly sets us free.

Relationships also helps to free us from falsehood, Pope Francis continued. Truth is best grasped, he said, “when it flows from free relationships between persons, from listening to one another.”

“An impeccable argument can indeed rest on undeniable facts,” he noted, “but if it is used to hurt another and to discredit that person in the eyes of others … it is not truthful.”

“We can recognize the truth of statements from their fruits: whether they provoke quarrels, foment division, encourage resignation; or, on the other hand, they promote informed and mature reflection leading to constructive dialogue and fruitful results.”

Peace is the true news

The best antidotes to fake news are people who are “not greedy,” and are “ready to listen” and “engage in sincere dialogue so the truth can emerge,” the Pope said. Journalists, as “protectors of the news” whose mission is not to dive into “feeding frenzies” or rush “for a scoop,” are called instead to remember that the heart of information is persons. A journalist is therefore tasked, he said, with “ensuring the accuracy of sources” and promoting “goodness, generating trust, and opening the way to communion and peace.”

Pope Francis closed his Message for the 52nd World Day of Social Communications by inviting everyone to promote a journalism of peace. The Pope clarified that he does not mean a “saccharine kind of journalism that refuses to acknowledge the existence of serious problems or smacks of sentimentalism.” Rather, he said he means a journalism “that is truthful and opposed to falsehoods, rhetorical slogans, and sensational headlines.”

The Holy Father also encouraged those working in the media to be “less concentrated on breaking news than on exploring the underlying causes of conflicts,” and to be “committed to pointing out alternatives to the escalation of shouting matches and verbal violence.”

Issued on the liturgical memorial of the patron saint of journalists, St. Francis de Sales, the Pope concluded his message on fake news and a journalism of peace by offering a new rendition of a traditional prayer of St. Francis:

Who is papal interviewer Eugenio Scalfari?