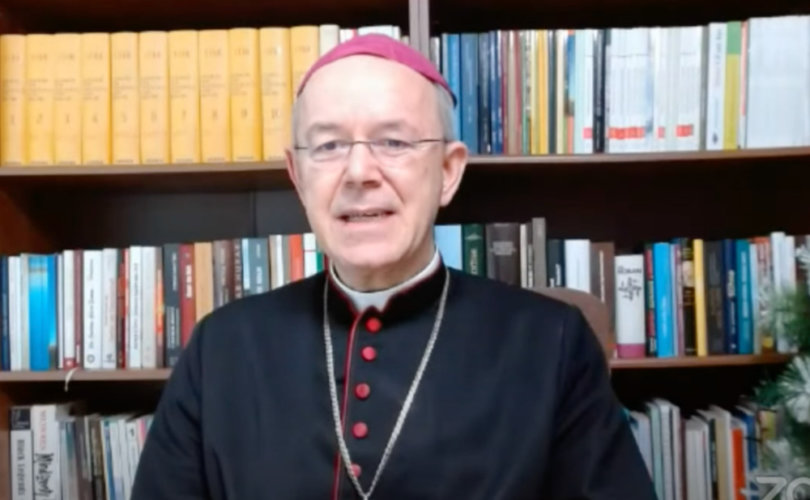 NUR-SULTAN, Kazakhstan (LifeSiteNews) – Bishop Athanasius Schneider has hit back at the ecumenical Congress Pope Francis recently attended, saying that Catholicism is “the only one true religion which God commanded to all people to believe.”

Speaking to EWTN’s Alexey Gotovskiy outside the Archdiocese of Astana’s Cathedral of Our Lady of Perpetual Help, the auxiliary bishop awaited the arrival of Pope Francis to a meeting with Kazakhstan’s Catholic clergy.

“We’re not one of the many religions; we’re the only one true religion which God commanded to all people to believe,” Bishop Schneider stated. “There is no other way to salvation.”

He made his clear remarks in light of the ongoing ecumenical meeting – the 7th Congress of Leaders of World and Traditional Religions – which Pope Francis was in Kazakhstan to attend.

The previous day Pope Francis had delivered an opening address at the Congress in which he decried conversion efforts, and told the various representatives that their “religions” remind them all that they are “journeying towards the same heavenly goal.” Assembled were numerous religious and political leaders, including, among many other Muslim leaders, the Grand Imam of Al-Azhar, Ahmed el-Tayeb; Sephardi Chief Rabbi of Israel Yitzhak Yosef; as well as Buddhist, Shintoist, and Taoist leaders, as well as  representatives from the U.N.

Pope Francis employed numerous quotes from a local Mulism philosopher to make his argument, but did not reference Jesus Christ or Sacred Scripture during his speech.

The outspoken auxiliary of Astana called for a re-organization of such ecumenical meetings which would thus reduce “the danger of relativism, indifferentism and syncretism.”

READ: Pope Francis signs document saying ‘differences in religion’ are part of ‘God’s will in creation’

— Article continues below Petition —
PETITION: Canonize Navy chaplain Fr. Capodanno for giving his life to save souls
Show Petition Text
7909 have signed the petition.
Let's get to 9000!
Thank you for signing this petition!
Add your signature:
Show Petition Text

Indeed, Bishop Schneider said that in meetings such as the recent Congress, “the Catholic Church is visually and exteriorly one of the many religions, and this is, in my opinion, a negative point and a dangerous point.”

“This is not correct,” he said, “because there is only one true religion, which is the Catholic Church, founded by God himself, but commanded to all man, to all religions, to believe and accept his son Jesus Christ, the only Savior.”

Shortly after Schneider uttered these words, the Pope signed a document stating that “pluralism and differences in religion, skin color, gender, race and language are expressions of the wisdom of God’s will in creation.”

Bishop Schneider had previously warned against such words when they appeared in the 2019 Abu Dhabi document which Pope Francis signed alongside the Grand Imam of Al-Azhar. At the time he said that by implementing the Abu Dhabi document without correcting its erroneous affirmation on the diversity of religions, “men in the Church not only betray Jesus Christ as the only Savior of mankind and the necessity of His Church for eternal salvation, but also commit a great injustice and sin against love of neighbor.”

As LifeSiteNews has reported, Pope Francis later rebuffed the bishop’s criticisms of the ecumenical Congress while on his return flight to Rome.