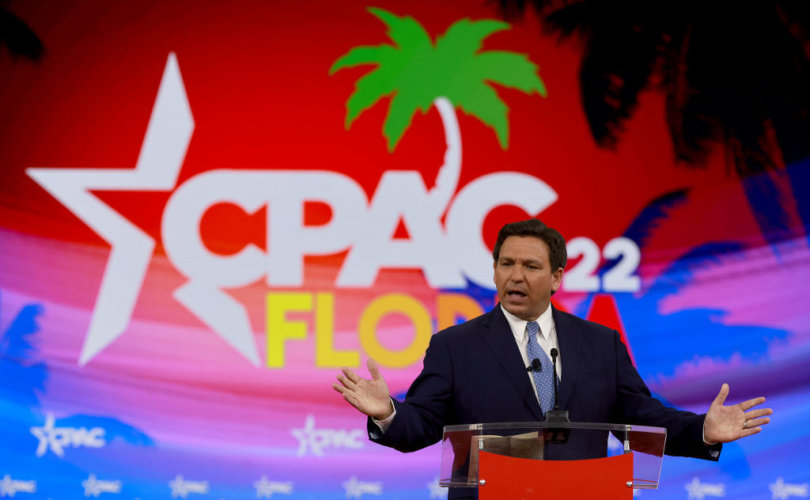 The Republican-led Senate voted 23–15 in favor of the bill, H.B. 5, on Thursday evening, which will make abortions illegal in Florida after a child is determined to have been conceived at least 15 weeks prior. The legislation anticipates a possible Supreme Court decision to overturn Roe v. Wade later this year.

The bill includes exceptions in two cases: first, when “the termination of the pregnancy is necessary to save the pregnant woman’s life or avert a serious risk of substantial and irreversible physical impairment of a major bodily function of the pregnant woman other than a psychological condition;” and second, when a baby is considered to have suffered a “fatal fetal abnormality,” which the bill describes as “a terminal condition that, in reasonable medical judgment, regardless of the provision of life-saving medical treatment, is incompatible with life outside the womb and will result in death upon birth or imminently thereafter.”

On Wednesday, Republicans voted down an amendment to the bill which would extend the exceptional cases to include incest, rape, and human trafficking.

Bill sponsor Sen. Kelli Stargel defended the decision not to include rape and incest as exceptions to the rule, stating that a child should not “be killed because of the circumstances in which it was conceived.”

The Supreme Court is currently deliberating on the Mississippi law and is expected to decide whether all so-called “pre-viability” abortion limits are unconstitutional this summer.

Florida’s bill, which was passed by the House last month, now makes its way to the governor’s desk where, if signed, it will become effective on July 1.

Following the vote, Florida’s Catholic governor said that the protections offered for the unborn by the bill “are warranted, and I think that we’ll be able to sign that in short order.”

“These are protections for babies that have heartbeats, that can feel pain, and this is very, very late,” he added.

Prior to the bill passing the Senate, DeSantis had indicated his support, saying it “makes a lot of sense” and adding that more pro-life legislation will be making its way through the legislature, which “we’re going to be welcoming.”

Nominally Catholic President Joe Biden strongly opposed Florida lawmakers in a Friday tweet, criticizing the pro-life legislation as “a dangerous bill that will severely restrict women’s access to reproductive health care” and stating that his administration “will not stand for the continued erosion of women’s constitutional rights.”

Last night, the Republican-controlled Florida legislature passed a dangerous bill that will severely restrict women’s access to reproductive health care. My Administration will not stand for the continued erosion of women’s constitutional rights.

Vice President Kamala Harris backed Biden, issuing a statement Friday saying the “right of women to make decisions about their own bodies is non-negotiable. If signed into law, Florida’s bill would violate the constitutional right to abortion that the Supreme Court has recognized for nearly 50 years.”

National pro-life group Susan B. Anthony (SBA) List, on the other hand, celebrated Thursday’s move as “the strongest protections for unborn children and their mothers in state history if enacted” in a Friday press release.

“At a time when pro-abortion extremists in Washington are pushing a deeply unpopular agenda of abortion on demand until the moment of birth, states like Florida are fighting back to assert the will of the people,” SBA List state policy director Sue Liebel said.

“This humane legislation would save more than 3,000 lives a year in Florida by limiting abortion at a point when science shows unborn babies can feel pain. Floridians of all stripes agree this would be a significant step forward for the Sunshine State. We appreciate Gov. DeSantis’ strong stand for women and children and greatly look forward to seeing him sign this bill into law.”

The Catholic bishops of Florida added their voices in support of the bill’s passing, describing the legislation as “an incremental, yet important, step” towards the protection of innocent lives.

Approximately four percent of abortions in Florida — more than 3,300 — occurred at 15 weeks of pregnancy or later in 2020, according to the Charlotte Lozier Institute, the SBA List’s research arm. As of 2020, Florida has one of the highest abortion rates in the U.S. at 19.2 per 1,000 women, and 65 abortion sites — triple that of any other southern state.

The 15-week ban would significantly curb late-term abortion in the Southeast, where many women seeking late abortions travel due to relaxed restrictions, according to Reuters.