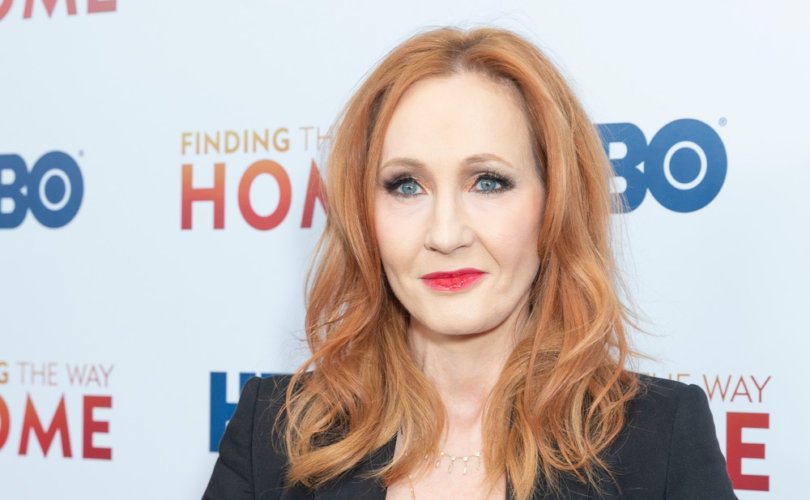 (LifeSiteNews) — Taxpayer-funded National Public Radio (NPR) is under fire for publishing a favorable review of a novel by a radical transgender activist depicting the violent deaths of dissenters from transgender ideology, including Harry Potter author J.K. Rowling.

The official product description of Gretchen Felker-Martin’s Manhunt calls the novel an “explosive post-apocalyptic novel that follows trans women and trans men on a grotesque journey of survival” as they evade various threats including “murderous TERFs,” an acronym for liberal feminists who draw the line at recognizing men who “identify” as female to be “women.”

The Daily Mail reported that the book contains a passage explaining that Manhunt’s fictionalized version of “the Harry Potter lady” took “her ‘rich’ TERF friends to a castle in Scotland where one of the characters ‘flips in the middle of the night and starts ripping into the other guests before someone knocks over a lamp or something’ leaving people to ‘burn alive’ before ‘finally the whole castle collapsed.’”

The story also references a group of violent TERFs who call themselves the “Knights of J.K. Rowling” and sail on a warship named after Robert Galbraith, a pen name the real Rowling uses for some of her books.

Rowling is a doctrinaire liberal on most issues, going so far as to retroactively add a same-sex relationship to the backstory of Harry’s mentor Albus Dumbledore, despite the character’s sexual attraction not being referenced in the books themselves or their film adaptations. That relationship is slated to be referenced in the upcoming Fantastic Beasts: The Secrets of Dumbledor, via dialogue that will ironically be removed from the Chinese release of the film.

Even so, Rowling has been deemed a bigot by pro-LGBT activists for refusing to go along with the notions that gender is a social construct that may be changed by merely declaring oneself to be a woman or that life-altering transition treatments are appropriate for children. Manhunt is among the latest contributions to that narrative.

“To be upfront, Manhunt is not for everyone,” Liam McBain wrote in the NPR review. “It is gory, and brutal, and sickened me more than any other horror novel I’ve read in recent memory. I am sure it will challenge many trans readers (like myself) as much as it will challenge cis readers. I mean all this as a sincere compliment to Felker-Martin’s work.”

Felker-Martin’s tale of body horror, graphic sex, and brutal violence “illuminates the treatment of trans women as sexual objects, regardless of how it affects them — even if it looks different from how this plays out in our world”; as well as the use of the pronoun “it” to “delegitimize and dehumanize trans women in our timeline,” McBain wrote.

The ultimate point of the book is that “enforcing gender kills people,” the NPR review claims. “And today’s ‘gender critical’ feminists, as gender theorist Judith Butler has written, are buying into fascism. The TERFs in the book, taken to an ideological end, were vital in amping up the core horrors of the book: the fear of not knowing what will happen to you when someone realizes you’re trans, because they think trans people — trans women especially — already are monsters. The fear of a forced detransition, an irreversible one, that takes your entire personhood away. Felker-Martin brought these daily terrors to life in a truly bone-chilling way.”

Several readers took to social media to convey that they were less than impressed with the book or the review:

OK, I just finished the book. Took 3 days. By far, one of the worst books I’ve ever read and not even because of its writer’s clear mental illness, which NPR called brilliant. There are multiple reasons to spit on Manhunt. Doesn’t matter if you’re left or right. I’ll review soon. https://t.co/Ivvio4tjVZ

It will never cease to amaze me how women with questions and concerns have been monstered for dissenting on this issue, even just for saying: This issue is a lot more complicated than we're pretending it is. I've never seen anything like it.

This point here is one we really don't make enough of. Endless talk of online harassment and violence and look how these people talk. This book looks like pure extremely violent trans revenge fantasy, and yeah, it was favorably reviewed in NPR:https://t.co/XC7zpLxf0Z https://t.co/QWppC0lnxa

Amazon has come under fire in the past for blocking certain conservative books on transgenderism, homosexuality, the right to life, and COVID-19, though last year it restored advertising to Abigail Shrier’s Irreversible Damage, which details the harm that gender confusion inflicts on children.