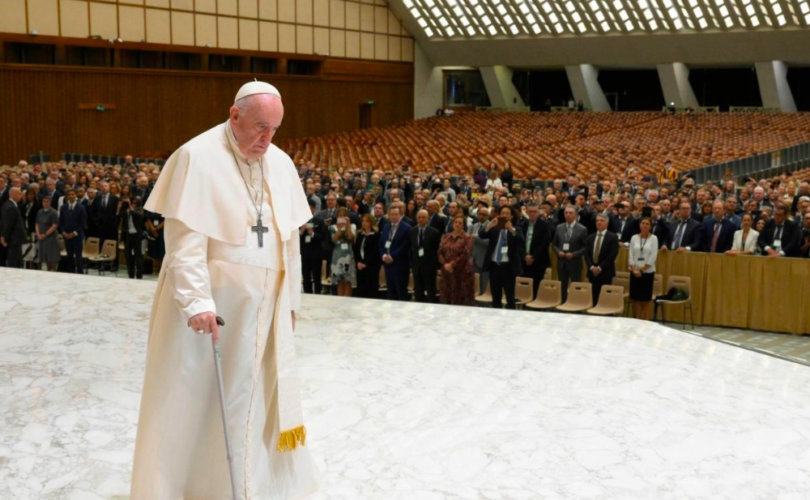 VATICAN CITY (LifeSiteNews) – Pope Francis met today with a large delegation from pro-LGBT accounting and professional services group Deloitte, urging them to promote “diversity” and “inclusion” in all areas of life, as the world proceeds along a new “emerging paradigm.”

Addressing the large group, which included the company’s CEO Punit Renjen, in the Vatican’s Paul VI audience hall, Pope Francis urged those assembled to work for “a more humane, just and fraternal world.”

A key aspect of this would be to “enhance diversity,” said Francis, employing economical phraseology to argue for “economic ‘ecosystems’.”

In completely avoiding any mention of Christianity, or of God, as noted by Vatican journalist Ed Pentin, Pope Francis also managed to avoid any condemnation of the company’s promotion of the LGBT movement.

Pope Francis wants to “reorient our way of living” toward an inclusive, pro-LGBT, pro-abortionist church.
We will not follow. We will stay with our Savior and Lord, Jesus Christ.
Jn 12:42: “they did not confess him… For they loved the praise of men more than the praise of God.” https://t.co/pvjf49LaAD

Instead, referencing economic crises, the “effects of climate change” and the need to care for “our common home,” Francis urged the pro-LGBT group to play a role in forging a new order in society. Drawing from language commonly employed by LGBT advocates, Francis said that this would be based on “inclusion, moderation, care and wellbeing.”

My hope is that you can assist organizations to respond to this call. You have the right skills to cooperate in building that necessary bridge between the current economic paradigm – based on excessive consumption and which is experiencing its final phase – and the emerging paradigm centered on inclusion, moderation, care and wellbeing.

The delegates were told to “cooperate in reorienting our way of living on this our planet, which we have damaged in terms of both the climate and inequality.”

Deloitte makes no secret about its prominent promotion of LGBT ideology. “Pride is not something we show just once a year at Deloitte – it’s part of our culture, allowing everyone to bring their whole selves to work every day,” the company states.

In a special section of the company website, Deloitte states “For our LGBT+ colleagues it means knowing that they will be seen and heard as their true authentic selves—valued, and appreciated for all that they are and what they contribute to Deloitte’s Purpose to make an impact that matters.”

The company is currently conducting a social media campaign entitled “#QueerAllYear” which it says is in response to its perceived lack of requisite attention on the LGBT movement outside of “Pride month.” The campaign notes:

But what about the rest of the year? When the confetti is swept up and flags put away – how do we keep the spotlight on helping LGBT+ friends, family, and colleagues feel seen, valued and included?

READ: This pontifical foundation is bringing LGBT ideology to children around the world

Deloitte has regularly received public accolade for its promotion of LGBT ideology.

While Pope Francis made no mention of Catholic teaching (or religion) when addressing the Deloitte delegation, the Church firmly condemns LGBT ideology.

The Catechism of the Catholic Church #2357 teaches that: “‘homosexual acts are intrinsically disordered.’ They are contrary to the natural law. They close the sexual act to the gift of life. They do not proceed from a genuine affective and sexual complementarity. Under no circumstances can they be approved.”

Recently, Bishop Donald DeGrood of Sioux Falls, South Dakota, warned against promotion of LGBT ideology. Arguing against supporting individuals in transgender beliefs, DeGrood wrote “when a person experiences same-sex attraction or some form of gender dysphoria, such struggles do not change the biological fact of how God created that person, and it would be untruthful for the Catholic Church or our Catholic schools to pretend otherwise.”

Earlier this year, Cardinal Gerhard Müller, former prefect of the Congregation for the Doctrine of the Faith (CDF), told EWTN that LGBT ideology and same-sex ‘marriage’ are “not in accordance with the Word of God.”