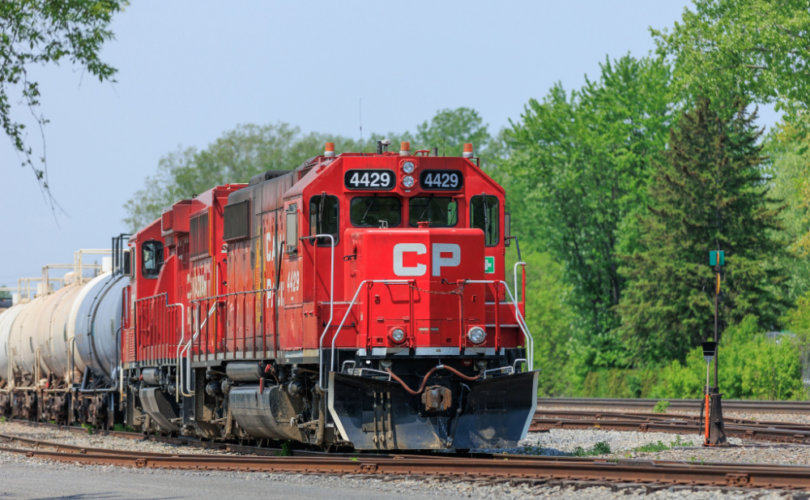 OTTAWA (LifeSiteNews) – Canadian Attorney General David Lametti at the behest of Prime Minister Justin Trudeau used his authority to crush the Freedom Convoy based on unproven fears that protesters would try to block rail lines.

According to Blacklock’s Reporter, briefing materials for Lametti dated April 23, 2022, stated, “Threats were made to block railway lines which would result in significant disruptions.”

“The result of a railway blockade would be significant,” the staff added.

“Canada’s freight rail industry transports more than $310 billion worth of goods each year on a network that runs from coast to coast.”

However, the staff briefing notes do not say why the federal government did not use the Emergencies Act to stop a large railway blockade in 2020 in support of Wet’suwet’en First Nation as they were protesting a gas pipeline.

That blockade lasted months on end, and estimates put the cost at $283 million along with over 1,000 people losing their jobs.

VIA Rail, Canada’s state-run passenger train company, itself lost $33.6 million as a result of the rail blockades.

In 2020 alone, there were some 50 or more blockades nationwide, none of which had the federal government calling for use of the EA to try and stop.

Canada’s draconian COVID measures were the catalyst for the Freedom Convoy, which took to the streets of Ottawa to demand an end to all COVID mandates for three weeks in February. As a result, Prime Minister Justin Trudeau on February 14 enacted the EA to shut down the Freedom Convoy.

News recently broke that an internal cabinet poll showed that the majority of Canadians believed the use of the Emergencies Act by Trudeau to crack down on the Freedom Convoy was not warranted.

As for the Freedom Convoy, protesters remained almost entirely peaceful, with no one associated with the movement blocking any railway lines.

According to Blacklock’s Reporter, Lametti’s department briefing notes showed that they were fearful the Freedom Convoy would turn violent, despite having no evidence.

Staff claimed that “two bomb threats were made to Vancouver hospitals and numerous suspicious packages containing rhetoric that references the hanging of politicians and potentially noxious substances were sent to offices of Members of Parliament in Nova Scotia.”

Staff had to acknowledge, however, that the threats link “to the convoy has not yet been established in either case.”

However, Lametti’s staff wrote that “ideologically motivated violent extremism adherents may feel empowered by the level of disorder resulting from the protests.”

Not one Freedom Convoy protester was charged with terrorism. Most of the over 230 people arrested were given mischief citations.

A national public inquiry into Trudeau’s use of the EA has been postponed for at least one month, due to the commissioner of the hearings Judge Paul Rouleau, needing to go for an unforeseen surgery.

Many Conservative Party of Canada MPs have called into question the tactics used by police and the Trudeau government to go after the Freedom Convoy.

Recently released email records show that the Ottawa Police Service (OPS) had a blacklist made of fundraisers linked to the Freedom Convoy that was then sent to a government-run agriculture bank.