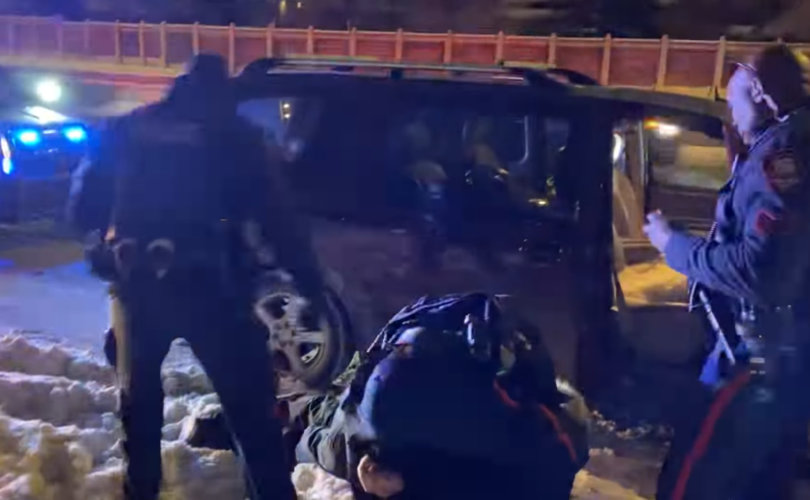 CALGARY, Alberta (LifeSiteNews) – Supporters of Canadian Christian pastor Artur Pawlowski, who is in jail awaiting a bail hearing on a “mischief” charge, are holding daily protests in support of the preacher.

A video post on the Facebook page “Calgary Freedom Central” from a few days ago shows dozens of cars honking in support of Pawlowski in front of the Calgary Remand Centre, where he has been jailed for a week.

The protesters are calling for the immediate release of Pawlowski and have said they will gather outside every day until he is released. His bail hearing is set for tomorrow.

Last Tuesday, Pawlowski was arrested for the fifth time by an undercover SWAT team just before he was slated to speak at a peaceful Freedom Trucker protest at the Alberta-U.S. border near Coutts, Alberta.

The police had staked out the Christian preacher’s home, according to Pawlowski’s son, Nathaniel.

Rebel News reported that Pawlowski is facing “trespassing and mischief over $5,000 criminal charges, in addition to being charged under Alberta’s Critical Infrastructure Defence Act for allegedly abetting the Coutts, Alberta trucker blockade.”

“Pastor Artur is the first person ever charged under the Act, but it is a charge that many suspect is not likely to stick,” Rebel News reported.

Nathaniel Pawlowski said in a recent Rebel News report that his dad’s jailing is a government “vendetta.”

“This has nothing to do with law, everyone can see, any lawyer can see, any judge can see that these charges are bogus and they will not stick, so that’s why they are trying to keep in here denying them bail,” Nathaniel said.

“That’s how they want to hurt him. He embarrassed them on a global scale. He’s exposed their corruption. People are waking up. He has a powerful voice. They’re scared of that voice so they want to keep in prison now as punishment.”

According to Pawlowski’s brother Dawid, Artur’s conditions in jail have been “filthy,” he has been treated “horribly,” and he was even denied access to fresh drinking water.

Pawlowski is being represented by attorneys Sarah Miller and Chad Haggerty with the help of Rebel News, who is raising money for his legal fees at savearthur.com.

Pawlowski last spent time in jail after being arrested on New Year’s Day in a highway takedown for allegedly breaking a court order. He was released after one night.

Pawlowski made international headlines after he and Dawid were arrested in their first highway takedown in May 2021 for holding worship services contrary to Alberta’s COVID rules affecting church service capacity limits.

He and Dawid spent a total of three nights in solitary confinement.

Under the “conservative” government of Alberta Premier Jason Kenney, three Christian pastors, including Pawlowski, were jailed for going against COVID rules.

Despite Kenney suddenly lifting the province’s COVID vaccine passport due no doubt to the trucker Freedom Convoy and border protests in Alberta, many COVID rules remain.

Masking is still mandatory for those over age 12, and capacity limits remain for many venues. These won’t be lifted for at least two more weeks.