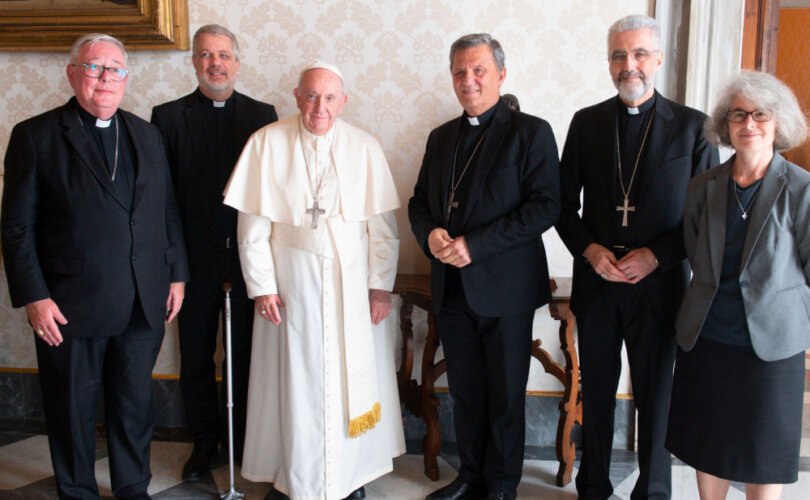 VATICAN CITY (LifeSiteNews) – The Vatican has unveiled the document to guide the next stage of the Synod on Synodality, which presents calls for more inclusion of the divorced and “re-married,” LGBT groups, and proposes a “female diaconate.”

The 45-page document was presented at a press conference at the Holy See Press Office, October 27, by the Synod on Synodality team: Cardinal Jean-Claude Hollerich (relator general of the Synod), Cardinal Mario Grech (general secretary of the Synod of Bishops), Professor Anna Rowlands, Father Giacomo Costa (consulter of the General Secretariat of the Synod), and Monsignor Piero Coda (secretary general of the international theological commission).

The contents of the working Document for the Continental Stage of the Synod (DCS), entitled “Enlarge the space of your tent,” will now guide the next stage of the Synod on Synodality, which has been extended until 2024.

The document itself was compiled by a group of “experts,” theologians, laity, and bishops over the course of a number of days in September. As LifeSiteNews previously reported, these “experts” comprised a number of individuals who both oppose the Traditional Mass and support contraception.

The DCS is a summary of the numerous reports submitted by 112 of 114 bishops’ conferences, along with 17 of the 23 Roman Curial dicasteries, and from all of the Eastern Catholic churches.

The authors noted that the document is not “a conclusive document, because the process is far from over,” nor is it part of the “Church’s Magisterium, nor is it the report of a sociological survey.” Instead, “it remains a theological document in the sense that it is oriented to the service of the Church’s mission: to proclaim Christ dead and risen for the salvation of the world.”

Writing that the synod has so far produced “abundant fruits, new seeds that promise new growth,” the document added that “there is no lack of clear expressions of rejection,” with “skepticism about the actual effectiveness or even the intent of the synodal process” also expressed in the quotations drawn from the examined reports.

Church must be ‘more welcoming’ to LGBT and ‘remarried’

The document drew from the various diocesan reports to refer to groups of people who felt “neglected and excluded.” Among those who “feel a tension between belonging to the Church and the experience of their own affective relationships,” the document listed:

Addressing such an aspect, Cardinal Grech stated during the press conference that “at this moment we are not taking any position” when asked about the pro-LGBT images shared by the synod’s social media accounts. Instead, he repeated that the synod was a process of being a “listening Church.”

Role of women and ‘female diaconate’

Much attention is given to the role of women in the new document, including calls for female ordination.

The document stated that there was a dual need to draw “men to a more active membership in the Church and enable women to participate more fully at all levels of Church life.”

Addressing the assembled media at the press conference, Rowlands stated that “the question of the diaconate for women came up repeatedly, across many, many reports.”

Rowlands was supported by the text of the DCS, which noted that many submitted reports:

[A]sk the Church to continue discerning on a series of specific issues, namely the active role of women in the governance structures of the Church bodies, the possibility for women with adequate training to preach in the parish setting, the female diaconate. Much more diverse positions are expressed with regard to the ordination of women to the priesthood, which some syntheses call for, while others consider the question closed.

The heterodox Women’s Ordination Conference welcomed these sections of the DCS saying that it was “encouraged” by the promotion of the “near universal calls for women in governance, women preachers, and ‘a female diaconate.’”

Pope John Paul II had already condemned female ordination, writing in his 1994 Apostolic Letter Ordinatio Sacerdotalis: “I declare that the Church has no authority whatsoever to confer priestly ordination on women and that this judgment is to be definitively held by all the Church’s faithful.”

The Polish pope also quoted from Pope Paul VI’s 1975 letter to the Anglican Archbishop of Canterbury, in which the former pontiff wrote that “the exclusion of women from the priesthood is in accordance with God’s plan for his Church.”

Questions of liturgy and Eucharist

The aspect of the Church’s liturgy was also addressed, with the DCS highlighting how the liturgy can be linked to “the situation of indigenous peoples. Their spirituality, wisdom and culture have much to teach us.”

Renewed calls for female roles in ministry were reflected in this aspect also, with the document stating that questions raised in the various reports ranged “from the redesign of a liturgy that is too centered on the celebrant, to the modalities of active participation of the laity, to the access of women to ministerial roles.”

Additionally, the DCS stated that “many reports echo the pain of not being able to access the sacraments felt by remarried divorcees and those in polygamous marriages. There is no unanimity on how to handle these situations.”

Highlighting a report from the U.S., the document also noted that “many regret the restrictions on the use of the 1962 Missal.” This aspect, however, was not expanded upon or addressed further.

The Synod on Synodality has already been compared to the Second Vatican Council, and described by commentators as promoting a “parallel church.”

Such a description was supported by the text of the new document, which noted that the “conversion and reform” of the synod “translates into an equally continuous reform of the Church, its structures and its style, in the wake of the desire for a permanent ‘aggiornamento,’ a precious legacy of the Second Vatican Council to which we are called to turn on its 60th anniversary.”

In an apparent abandonment of adherence to Catholic doctrine or principles, the document stated, when describing the way forward, that:

The message of the synodal journey is simple: we learn to walk together and sit together to break the same bread, so that everyone can find their place. Everyone is called to take part in this journey, no one is excluded. This is what we feel called to do in order to credibly proclaim the Gospel of Jesus to all peoples. This is the road we seek to follow for the continental stage.

In what is one of the rare occasions of a description of synodality itself, the DCS outlines how the synod deals with the many “tensions” highlighted during the event: “[A] synodal spirituality can only be one that welcomes differences and fosters harmony, and that draws from the tensions the energy to move forward.”

— Article continues below Petition —
Join Bishops in calling out Pope Francis' statement for contradicting the faith
Show Petition Text
5963 have signed the petition.
Let's get to 6000!
Thank you for signing this petition!
Add your signature:
Show Petition Text

Next steps in synodal process

The synod is still in a “listening phase,” said Anna Rowlands, with the next stages still being a continuation of this “listening.”

However, the DCS calls on the Church to already begin implementing a process of change: “All the institutions of the Church are called to question themselves on how to integrate the synodal impulse into the exercise of their functions and mission, renewing their structures and procedures or introducing new ones.”

Following the release of the new text, bishops around the world are now to draw up their own local reflections on the document.

After this, seven continental meetings of bishops’ conferences will take place, to be held in Africa, Oceania, Asia, the Middle East, Latin America, Europe, and North America.

With all the resulting documents from these meetings having been compiled, they will in turn form the basis of the working document (Instrumentum laboris) – finalized by June 2023 – for the Synod of Bishops to be held at the Vatican, October 4 through 29, 2023.

As with the original Preparatory Document, the DCS called for the futures stages of the synod to give “particular attention” also to “representatives of other religions and faith traditions; and of people without religious affiliation.”