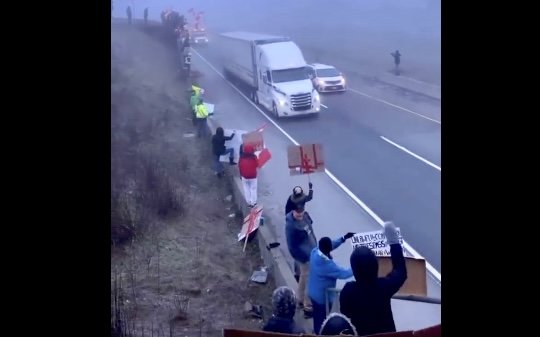 The “Freedom Convoy 2022” group raised $3.5 million in only 11 days, seeing grassroots support for Canadian truckers against both a COVID jab mandate for all haulers crossing the border and all other virus rules increase at an astonishingly rapid pace.

According to the “Freedom Convoy 2022” Go Fund Me page, the group has support from more than 44,000 donors who are helping fund the convoy, which, once in Ottawa, plans to stay there until political leaders remove all discriminatory COVID measures.

The funds raised will go toward the cost of “fuel, food and lodgings to help ease the pressures of this arduous task.”

Over the weekend, truckers and their supporters from western Canada began their caravan, starting from cities and towns in British Columbia, with thousands of Alberta truck drivers joining yesterday.

The trucker caravan from the Edmonton, Alberta, area alone yesterday was said to be more than 40 kilometers in length before arriving in Calgary to head east to Ottawa.

From British Columbia, estimates put their caravan, who have now joined up in Alberta on their way east, at well over 70 kilometers in length.

Truckers in Ontario and other parts of eastern Canada will begin, or already have done so, separate convoys to Ottawa in the coming days.

The mandate came despite a report that Canada Border Services Agency (CBSA) said un-jabbed truck drivers would be allowed to enter Canada from the United States.

The jab mandate for truckers was first announced November 19 by the federal government.

Some Canadian trucking companies have  already reported driver shortages as a direct result of the COVID jab mandate for all haulers crossing the border.

Rally organizer: We are here to ‘love one another and forgive one another.’ ‘They can’t hurt us and they know it’

Tamara Lich, who is from Medicine Hat, Alberta, and the main organizer of the group “Freedom Convoy 2022,” said in a video she was amazed at the “beautiful site to see” of the truckers who have joined the convoy to Ottawa.

She also said that the convoy will be a peaceful protest, pointing out she has been working with law enforcement to ensure that the convoy is done in accordance with all local laws.

Lich added that that the time for egos is “over.”

Images on social media showing armies of people making food for convoy participants as well as roadside send-offs shows just how much steam this purely grassroots-led rebellion has gained against Trudeau’s mandates.

“Citizens do not protest simultaneously all over the world when nothing nefarious is going on. The world is awake! I’m proud of all the protesters I’ve seen today – also very proud of the Canadian truckers! #FreedomConvoy2022  #TrudeauMustGo #endmedicalsegregation #DoNotComply Flag of Canada,” wrote Twitter user Chelsea MacDonald yesterday.

Wrote one Twitter user named Simon yesterday, “Some people think this trucker convoy is stupid, but look how amped up people are over it. Huge crowds to cheer them on. Donations flowing in to support them. Trudeau has a big problem on his hands now. People are uniting. His divisive rhetoric isn’t working anymore.”

Popular Canadian psychologist and cultural analyst Jordan Peterson, who has come out hard against COVID mandates, wrote bluntly today on Twitter, “50000 trucks. You’re in for a very bad week @JustinTrudeau. And that’s not everything that’s about to happen.”

Alberta Premier Jason Kenney said late last week that Trudeau has to end at once the trucker COVID jab mandate.

Today, Kenney went a step further, admitting the trucker jab mandate has turned into a “crisis” and said both the Canadian and American governments need to take “immediate” action to fix the crisis.

“I’m getting pictures like this from grocery stores across Alberta this morning. This is turning into a crisis. It requires immediate action by the Canadian & US governments,” tweeted Kenney today.

Kenney said that he was “on the phone with US Governors this morning who share my concerns.”

“We are working on a joint letter to the President and the Prime Minister urging them to use common sense, end the policy that has taken thousands of trucks of the road,” tweeted Kenney today.

Many called out Kenney, however, for saying one thing while doing another, pointing out that discriminatory vaccine passports and draconian COVID rules are still in place in Alberta.

“Jason Kenney, enforcer of vaccine passports and mandates, complains to win some cheap political points while he simultaneously holds “unvaccinated” Albertans hostage. Got it,” tweeted Albertan Paul Mitchell, who ran as People’s Party of Canada (PPC) candidate in 2019.

“I regret that the Conservative Party and conservative politicians are fear mongering to Canadians about the supply chain, but the reality is that vaccination is how we’re going to get through this,” Trudeau said to reporters.

Conservative Party of Canada (CPC) MP Pierre Poilievre went after the mandate last Wednesday, calling it a “vaccine vendetta” against un-jabbed truckers. Yesterday, he said that “COVID has become a never-ending excuse for power-hungry authorities to replace our freedom with their control. Enough. Reopen our businesses, let our truckers drive & restore freedom for all.”

Southern Manitoba CPC MP Ted Falk called the mandates “wrong” and not “constitutional” while speaking from a trucker protest at the U.S.-Canada border last week.

CPC leader Erin O’Toole, however, has been silent regarding the trucker freedom convoy, refusing to say today whether or not he supports them.

PPC leader Maxime Bernier, who has come out strong against COVID mandates of all kinds, said today that he was happy to see at least some CPC MPs speak out against mandates.

“Congratulations to @PierrePoilievre and the handful of Conservative MPs who are jumping on the bandwagon and finally denouncing Trudeau’s authoritarian measures after two years of complete silence. Hope to see you next weekend in Ottawa.#TruckerforFreedom,” wrote Bernier.

Trade associations from Canada and the U.S. began warning that the vaccine mandate could harshly impact an already stressed food and goods supply chain, which has seen massive disruptions due to the COVID crisis.