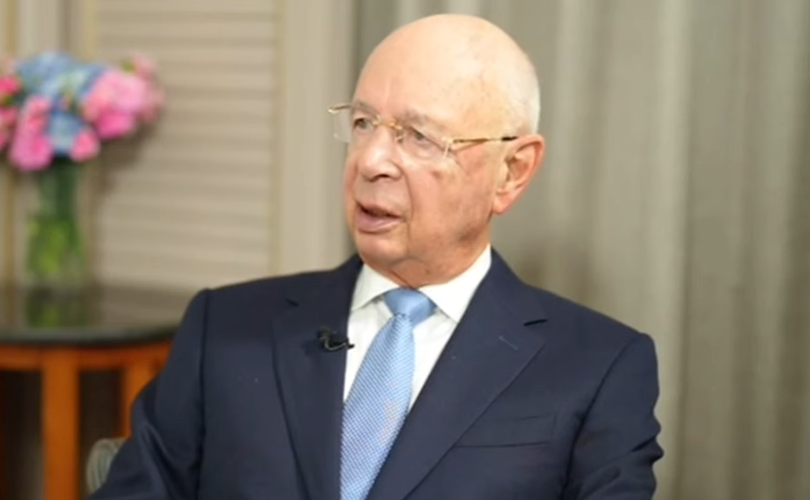 BEIJING (LifeSiteNews) — World Economic Forum chairman Klaus Scwhab has once again heralded China’s communist dictatorship as a “model for many countries” while proclaiming his desire for a “systemic transformation of the world.”

In an interview last week with China Global Television Network (CGTN) – a state-run English-language news channel based in Bejing – Schwab gave glowing praises to the communist nation, outlining the important role China has in his group’s “systemic transformation of the world.”

Starting with the role China is to play in this so-called “transformation,” Schwab said that the “first” aim should be “helping countries which are still left behind to achieve the level of development China has achieved,” with the “second” aim being to make sure that “with the new technologies, with the fourth industrial revolution … we do not go into a technology war, that we [instead] work together … to make sure that those technologies serve all human beings on earth … ”

Schwab continued by complimenting China – which currently runs a nationwide “Social Credit” surveillance system on its citizens and is accused of perpetrating a genocide against its Uighur Muslims population – saying, “I respect China’s achievements, which are tremendous over the last over 40 years.”

“I think it’s a role model for many countries … I think we should be very careful in imposing systems, but the Chinese model is certainly a very attractive model for quite a number of countries,” he added.

Asked by the news host if he could describe his impression of “China’s transformation” since the nation’s President Xi Jinping first spoke at Schwab’s World Economic Forum Summit in 2017, Schwab said it was a “historical speech” because it showed China’s “commitment to multilateralism” – a term used to describe “an alliance of multiple countries pursuing a common goal.”

“I look forward to having a strong Chinese voice in Davos [the city in Switzerland where the WEF meets], to explain even better to the world what it means … for global collaboration and global development.”

The TV host then asked Schwab what he thinks about China’s “Global Development Initiative,” which she explained is “complimentary” to the United Nations’ pro-population control Sustainable Development Goals.

“I think first it’s very important to take such initiatives, because we have to show a path to the future, we have to do it on a national, and on a global level,” replied Schwab.

“I think it’s important that we make sure those initiatives really get global support … We know the global system depends on regional pillars … but we have to avoid only two pillars, the world would be in a much more stable situation if all countries can become pillars of a collaborative system which allows different ways, but that the end provides a common approach.”

Toward the end of the interview, Schwab said he has been “watching with great satisfaction,” both during the COVID-19 so-called pandemic and the Russia-Ukraine conflict, as “the European Union has become more unified.”

“I’m very pleased that we speak not only of Chinese-U.S. relation but also again about Chinese-European relations … I think that very close ties [can develop] between China and Europe because there’s such an interwoven economy.”

This is not the first time Schwab has showered China’s communist dictatorship with praise, despite its long history of human rights abuses and tyrannical practices.

Earlier this year, Schwab applauded the Chinese communist’s leader for his country’s “significant social and economic achievements,” adding that China’s efforts have been beneficial to the larger global goal of creating a “more inclusive” and “more sustainable” world.

Beyond the growing mountain of evidence that the Chinese Communist Party (CCP) is carrying out a genocide against its Uighur Muslim population, Steven Mosher, an American social scientist and China expert, has related on multiple occasions that he personally “became an eyewitness to the most horrific population control program the world has ever seen” when doing research in China at a time when its “one-child policy” was in effect.

While Xi has somewhat moderated the program, now allowing three children per family, the barbaric practices used to enforce the program still remain.

Schwab’s praise for China also comes despite the nation’s organ-harvesting program, which is reported to have “hundreds of thousands of victims” and has been described as “one of the worst mass atrocities of this century.”

China’s “Social Credit System” – which seems to closely model many aspects of Schwab’s own “Great Reset” agenda – has become mandatory in China during Xi’s reign. One critic called the system, which ranks the “trustworthiness” of its citizens, the “nightmare of the world’s first truly totalitarian state.”