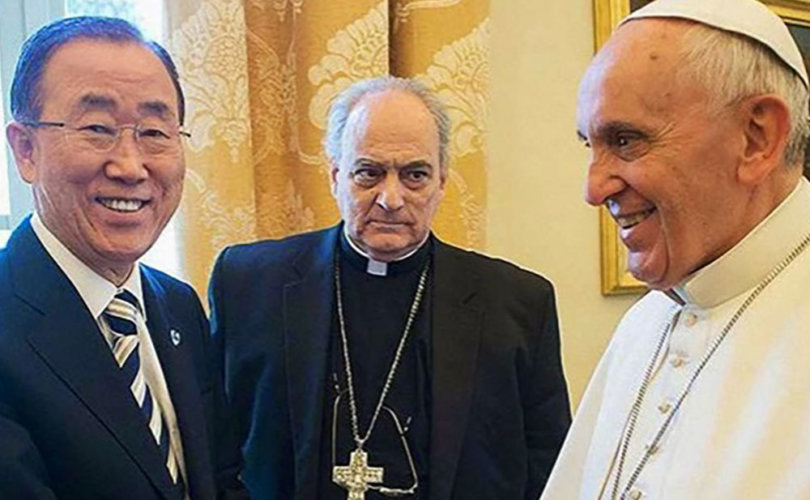 ROME, March 15, 2017 (LifeSiteNews) — The bishop tasked by Pope Francis with running the Vatican’s organization for promoting science has flipped St. Thomas Aquinas' moral principle of “double effect” on its head, stating in an interview that it means that if the “positive effect [of an action] is greater than the negative effect, then you can do it.”

This novel interpretation (at face value, indistinguishable from the moral heresy of consequentialism) just might provide the key to understanding why this bishop has a consistent track record of inviting enemies of the Church to conferences he oversees who openly advocate for contraception, abortion, and coercive population control, evils condemned by the Church.

Bishop Marcelo Sánchez Sorondo made the comment in the context of defending a Vatican-run conference he oversaw where pro-contraception-and-abortion population controllers spoke about saving the world from humans. Sorondo, from Argentina and a close advisor of the Pope, is the Chancellor for both the Pontifical Academy of Sciences as well as the Pontifical Academy of Social Sciences.

RELATED: One man, close to the pope, responsible for so much evil in the Vatican

During an interview with Jan Bentz for LifeSiteNews Sorondo downplayed the significance of pro-abortion population controllers such as Paul Ehrlich (who even supports forced abortion) and John Bongaarts addressing the conference.

He defended the invitations, saying that the pontifical academy “hears all voices” and has to “dialogue with everyone.”

“An academy has to listen to all voices. Our academics are not even Catholics. The president is not Catholic,” he said. (Critics, however, have pointed to the conspicuous absence of faithful Catholic voices at the conference.)

When pressed about why the academy invited enemies of the Church who promote a vision of the human person and of the world that is at odds with Catholic teaching, Sorondo became agitated. Instead of answering the questions, he attempted to belittle the questioner’s “rational” capacity before putting him on the spot with his own question.

LifeSite: [Ehrlich] himself has written about his agenda, that he wants sterilization [to decrease the population]. […]

Sorondo: You have to change your criteria if you want to progress in life. You need to dialogue with all cultures of the world, as the Pope said. […] And we have reached agreements that are very important. [Our partners] want to defend human liberty, human life, and peace against the new forms of slavery. And thanks to the invitation of people that your [pro-life-and-pro-family] people don’t want us to invite — [such as] Ban Ki-Moon, Geoffrey Sachs — we have achieved what those who defend the family always talk about but never achieve at all.

We, on the other hand, have achieved…that the new objectives for sustainable development…we established target 8.6 [sic, it’s actually 8.7], that is to eradicate the new forms of slavery. And that is more important for the family than all that stuff that they do.

LifeSite: Well, I also have a doctorate in philosophy, so…

Sorondo: In what philosophy?

Sorondo: So, with reason, St. Thomas spoke about the principle of the “double effect.” What is it?

LifeSite: It’s when a certain action has an effect which the agent of the action had not intended, then this [second] effect, for example, does not fall under a moral judgement.

Sorondo:  Well, that’s a complicated way of saying it. It is easier to say that if an action has two effects, if the positive effect is greater than the negative effect, then you can do it.

LifeSite: No, that’s not the principle of double effect.

Sorondo: Then you have not understood the principle of the double effect. […] You have to form your mind. And you have to understand St. Thomas better.

The ethical formula of “double effect,” attributed to St. Thomas Aquinas, enables one to evaluate the moral dimensions of an action that has two effects, one good and one evil, and to do the good action with moral certitude even though it might have an unintended consequence. In this way, according to Aquinas, killing in self-defense is morally justified.

Catholic moral theology has established specific guidelines when using the principle of double effect, including that: the intended action must be good in itself, the bad effect that results from the act may be foreseen but must not be intended, the good effect must not be brought about by using morally evil means, the good effect must be of equal or greater proportion to any evil effect which would result, and acts that have morally negative effects are permissible only when truly necessary, that is, when there are no other means by which the good may be obtained.

Sorondo’s understanding of the principle of double effect is concerning given the contraception and abortion advocates he has invited to speak at Vatican-run conferences. Some of the most prominent include:

• Paul Ehrlich: The author of the 1968 bestseller The Population Bomb spoke at the February Biological Extinction conference. He has defended forced abortion, contraception, and mass forced sterilization as legitimate methods to decrease the world’s population.

• Ban Ki Moon: The United Nations Secretary General spoke at the April 2015 “Protect the Earth, Dignify Humanity” PAS conference. Ki Moon promotes the so-called “right” to abortion worldwide and has criticized the lack of “safe abortion” in in conflict zones where it is illegal.

• Jeffrey Sachs: The Director of the Earth Institute also spoke at the same conference as Ki Moon. Sachs is an international proponent of population control and abortion. He called legalized abortion a cost-effective way to eliminate “unwanted children” when contraception fails, in his 2008 book Commonwealth: Economics for a Crowded Planet. He has described abortion as a “lower-risk and lower-cost option” than bringing a new human life to the world.

Applying Sorondo’s misunderstanding of the principle of double effect, one could argue that if decreasing the world’s population is viewed as a “positive effect” that has the “negative effect” of using contraception and abortion as a means of doing so, then “you can do it” since the positive effect is “greater than” the negative effect.

But is it possible that a Catholic bishop at the Vatican could be trying to move the Church towards accepting contraception, or even relaxing its teaching against abortion for the sake of a so-called greater good of preserving the earth?

Unfortunately, under Francis’ pontificate it seems that anything is possible. Sorondo has gone as far as to say that Francis’ declarations on the gravity of global warming as expressed in the encyclical Laudato Si’ are “magisterial” teaching that are equivalent to the Church’s condemnation of other grave evils.

Those were his actual words, coming from a bishop who has been appointed by Pope Francis to head two Vatican pontifical academies. If he does not know what the Church teaches about fertility and procreation, then why has he been given positions of responsibility and influence within the Church’s pontifical academies that deal with this topic?

There is a saying that birds of a feather flock together. And Sorondo is flocking with contraception and abortion advocates Ki Moon, Sachs, Ehrlich, Bongaarts, and others. And speaking of sayings about birds, there is another: If it looks like a duck, walks like a duck, and quacks like a duck, it’s a duck.

If someone consistently associates with pro-contraception-and-abortion population controllers, if he consistently gives them a platform at the conferences he oversees, if he even uses some of the same talking points they use to justify their position, can he — or anyone else — rationally deny that he is one of them?

How many more conferences must there be where Sorondo gives the Church’s enemies prominent platforms before it can be said that Sorondo himself is no friend of the Church and must be removed from his influential post?

Pope has urged having fewer children if ‘you cannot bring them up properly,’ claims Vatican academy member

Vatican bishop: ‘We don’t know exactly’ what the Church teaches on procreation; ‘education’ will help women have one kid instead of seven

At Vatican conference speaker says: We need contraception to protect the environment

Vatican stance on procreation appears at odds with Church teaching

Vatican event features array of population controllers – and, it seems, no expert to counter them