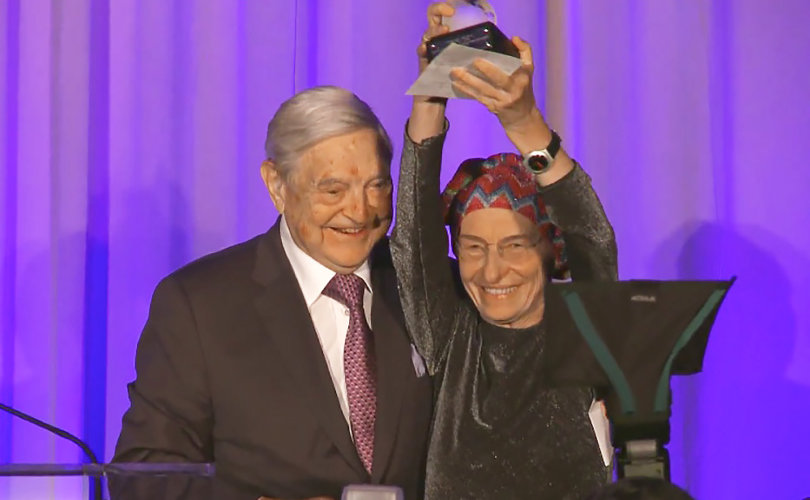 Emma Bonino, just after receiving 2015 Pursuit of Peace award from one of the world's leading enemies of life, family and faith - George Soros.

(LifeSiteNews) – The notorious Italian abortionist Emma Bonino spoke out against the U.S. Supreme Court’s overturning of Roe v. Wade, calling it a “step backward” that could spread to countries in Europe.

In the wake of the U.S. Supreme Court issuing its ruling Friday to overturn the nearly 50-year-old Roe v. Wade, abortion activists in the U.S. and further abroad have been swift to denounce and reject the ruling. Joining those who have expressed anger at the landmark pro-life ruling is Bonino, a key activist in the run-up to Italy’s legalization of abortion in 1978 and a long-standing friend of Pope Francis, having received regular praise from the Argentine pope.

Speaking to Italian media after the Supreme Court’s ruling, Bonino accused the court of having cancelled “the right to abortion.” The ruling “makes the USA jump back 50 years,” she argued.

The Supreme Court ruling that after 50 years cancels the right to abortion in the USA is a strong reminder also for us, women and men in Italy and in Europe: on rights you can never stand still, if you do not go forward you risk going back.

“Rights are not written in the tables of the law,” she said. “If you do not defend them every day, you wake up one beautiful morning and you no longer have them.”

Bonino had an illegal abortion at age 27, and after spending four months abroad evading arrest, returned to Italy where she served a 10-day prison term. She credited her arrest with causing the topic of abortion to take center stage in Italy.

The 74-year-old politician, who serves as a Senator for left-wing party +Europa party, then issued a statement on the party’s website, adding that the Roe ruling “is the child of various ideologies: a mix of obscurantist and reactionary views that take away women’s freedom of choice.”

She expressed concern that the pro-life ruling could have a knock-on effect in Europe, saying that it could lead to changes in Europe in favor of the pro-life cause.

“If greater spaces of freedom and responsibility are not won, the risk is to lose conquests that seemed unchangeable,” said Bonino, who was described in 2017 as at least partially responsible for over six million abortions since 1978, and has personally boasted that she and her group committed 10,141 illegal abortions.

“Now it will be up to individual states to decide, a bit like in Europe,” she said. “Just think of Poland and Hungary, as well as the anti-abortion regurgitations even in our country, to regulate this freedom.”

Speaking to the widely read newspaper Corriere Della Sera, she described the current abortion laws in Italy as being “already sufficiently bombarded,” suggesting that pro-lifers would be emboldened by the U.S. ruling to seek further protection for the unborn. Bonino criticized Italian medics for not performing enough abortions, saying that there are “now entire regions where the abortion law is not enforced, due to the mass conscientious objection of doctors and gynecologists.”

Bonino’s reaction to the Supreme Court ruling quickly spread through numerous Italian media outlets over the weekend, as the impact of the pro-life victory continued to take many by surprise.

Notably, Pope Francis – who has regularly praised and met amicably with Bonino – has yet to make any comment in reaction to the Supreme Court’s decision. The Pontifical Academy for Life (PAL) did release a statement Friday that took a noncommittal stance, writing that the Supreme Court’s ruling “shows how the issue of abortion continues to arouse heated debate.”

The PAL added that “it is not right that the problem is set aside without adequate overall consideration,” saying that “the protection and defense of human life is not an issue that can remain confined to the exercise of individual rights but instead is a matter of broad social significance.”

The absence of any reaction from either Francis or the Holy See Press Office to the ruling has created a peculiar dynamic, particularly given Francis’ close relationship with the pro-abortion Bonino, along with a number of other high-profile abortion activists.

Indeed, in a now-archived 2018 report in The Guardian, Bonino described a regular and close relationship with Pope Francis, with The Guardian calling Francis an “ally” for Bonino. As reported by The Guardian: “The two, she says with a grin, are in touch. ‘We have some connections, so we pass messages quite often, through friends.’”

Bonino earned notoriety for performing abortions with a homemade device, operated by a bicycle pump, and founded the Information Centre on Sterilization and Abortion (CISA) in 1975, which prominently lobbied to promote abortion in Italy prior to its legalization in 1978.

However, in 2016, Pope Francis described her as one of the nation’s “forgotten greats.” Admitting they had differing views, Francis added, “True, but never mind. We have to look at people, at what they do.”