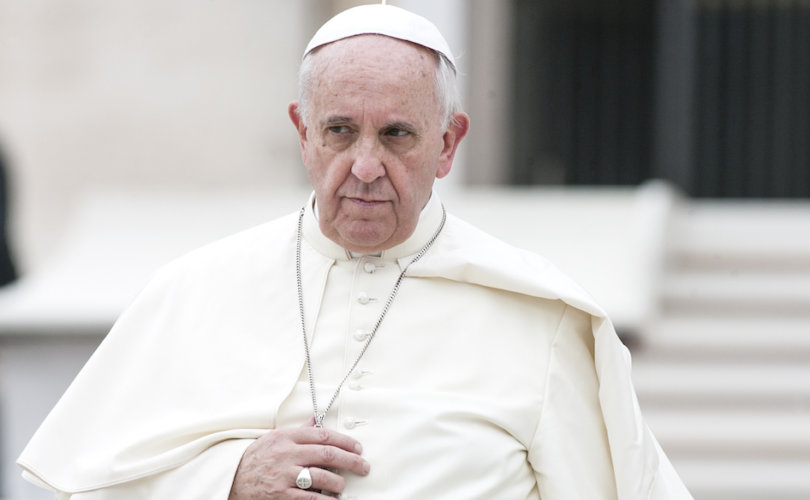 (LifeSiteNews) – Pope Francis harshly criticized U.S. Catholic network EWTN and other like-minded Catholic news outlets who have raised concerns about his pontificate, declaring that their criticism is “the work of the devil.”

The Pontiff voiced his disparaging remarks against the network founded by Mother Angelica during a meeting with fellow Jesuits in Slovakia last week.

During the same meeting, the Pontiff said that while gender ideology is dangerous, homosexual couples deserve pastoral support which is affirming of relationships based on sodomy.

Gender ideology, the Pope said, “is abstract with respect to the concrete life of a person, as if a person could decide abstractly at will if and when to be a man or a woman.”

“Abstraction is always a problem for me. This has nothing to do with the homosexual issue, though,” he told the room full of Jesuits. “If there is a homosexual couple, we can do pastoral work with them, move forward in our encounter with Christ.” He made no mention of the gravely sinful nature of homosexuality.

Toward the end of the meeting, noting that some Catholics view Pope Francis as “heterodox,” a Jesuit asked the Pope, “How do you deal with people who look at you with suspicion?”

The Pontiff responded by suggesting that criticisms of him are diabolical attacks on the Church.

“There is, for example, a large Catholic television channel that has no hesitation in continually speaking ill of the pope,” said Francis. “I personally deserve attacks and insults because I am a sinner, but the Church does not deserve them. They are the work of the devil. I have also said this to some of them.”

Jesuit-run America Magazine was the first to report the Pope’s calumny after another Jesuit priest, papal confidante Father Antonio Spadaro, editor-in-chief of Jesuit magazine La Civiltà Cattolica, who was present at the meeting, provided an English translation of Francis’ remarks. Spadaro is not a disinterested journalist when it comes to criticism of his good friend, the Pope. In 2018 he retweeted a call for EWTN to be shut down until its flagship news show host, Raymond Arroyo, is fired.

Although the Pope did not specifically mention EWTN, the Jesuit magazine gladly connected the dots for its readers, identifying EWTN as the primary target of the Pope’s condemnation.

While Francis did not name the “large Catholic television channel” in his answer, his remark “I have also said this to some of them” offers a clue as to which station he was referring. America has learned from three different Vatican officials, who asked for anonymity because they were not authorized to speak, that the pope touched on this same topic on his flight from Rome to Baghdad on March 5, when he greeted each of the journalists on the flight.

On that occasion, when the pope reached EWTN’s reporter and cameraman, one of them told him they were praying for him. He responded that maybe Mother Angelica, EWTN’s founder, is in heaven praying for him, but that they—referring to the entire network—“should stop speaking badly about me.” He used the Italian word sparlare, which means “to bad mouth,” “to say nasty things” or “to speak ill of.” America’s Vatican correspondent was on the papal flight and learned this immediately after the visit to Iraq.

America Magazine also drew a connection between EWTN and its associated publication, the National Catholic Register (NCR), noting that NCR was “one of two outlets that published the former nuncio to the United States and QAnon conspiracy theorist Archbishop Carlo Maria Viganò’s explosive 2018 ‘testimony’ calling on the pope to resign.”

The other outlet, left unmentioned by America Magazine Vatican correspondent O’Connell, was LifeSiteNews.

— Article continues below Petition —
SIGN: Show Pope Francis the Latin Mass will survive any suppression
Show Petition Text
36479 have signed the petition.
Let's get to 40000!
Thank you for signing this petition!
Add your signature:
Show Petition Text

EWTN’s criticism of the Pope: Frequent and well-warranted

During the course of his pontificate, Francis has signaled that the divorced and remarried should be allowed to receive Communion; told homosexuals that they are “born that way;” referred to gender-confused men as “girls;” taught against the death penalty, despite settled Church teaching on the matter; expressed openness to “women deacons;” welcomed pro-abortion public figures as Vatican experts; cheer-led for climate-extremism; entered a pact with the Chinese Communist Party (CCP) surrendering the underground Church faithful there to CCP control; ignored the Dubia by four Cardinals concerning Amoris Laetitia, as well as Archbishop Viganò’s testimony regarding his handling of then-Cardinal Theodore McCarrick’s homosexual predation; warned Catholics not to “proselytize” their neighbors; participated in a pagan ritual in the Vatican Gardens centering on a pagan idol, Pachamama; and has suggested that God wills the “diversity of religions.”

The following is a partial list of articles by LSN on EWTN’s well-warranted critical coverage of the Pope, giving a good indication of why the Pope singled out the U.S. Catholic TV network:

Robert Royal, Father Gerald Murray, and Raymond Arroyo honed in on lack of straightforward answers from the Vatican during Thursday’s show.

The Jesuit priest called the presence of a pagan god statue ‘a major scandal’ and told the Vatican to stop saying it’s a ‘symbol.’

Cardinal Gerhard Müller made his comment about Bishop Erwin Kräutler, one of the prominent actors at the recently concluded Amazon Synod in Rome

‘This should not be — ever occur in a Catholic institution, certainly not in the Holy See.’

‘I don’t see it:’ Two US bishops respond to charges of American ‘schism’

“I see people of real committed faith….who are concerned and asking, and saying ‘Give us the truth of Christ clearly.’”

Damian Thompson pulled no punches since leaving his post at the Catholic Herald.

Bannon called out the Pope for going after the ‘populist, nationalist sovereignty movement’ and for taking ‘the side of the globalists’

‘This is something that is unprecedented in our lifetime, and it is, for me, a crucial moment in the life of the Church.’

Catholics have been expressing concern that the Vatican is further capitulating to the “gay” lobby.

‘And if we look the other way…or pretend we’re not seeing it, we’re not being…good Catholics.’

The ‘invective’ exhortation ‘stigmatizes’ some Catholics.

EWTN’s The World Over guest and Catholic World News Editor, Phil Lawler, discussed his new book, “Lost Shepherd: How Pope Francis is Misleading His Flock.” Lawler warned Intervention is needed in the direction Francis is taking the Church.

Social scientist: Vatican is ‘negotiating the surrender’ of China’s real Church to the Communists

‘Why should the Catholic Church participate in its own dissolution and destruction?’

EWTN’s Papal Posse points to the crisis of authority as troubling.

Women deacons, laxity in receiving Holy Communion, the handling of the Order of Malta, and a pro-gay Vatican appointment are issues of concern.

‘It may go on for decades.’

Cardinal Burke gave a wide-ranging interview about the dubia he and three other cardinals submitted asking for moral clarity on Amoris Laetitia.